You are here: Home / Coaching / Win One for the Gipper [SHIN SPLINTS 2015]
5
SHARES
FacebookTwitter

Motivating human behavior is an art. How can you get someone to do what you want him/her to do? How can you extract maximum performance, sometimes in an environment of fatigue, discomfort and adversity? How can you ask others to join you in confronting fear, particularly fear of personal injury or death? How do you convince others to transport themselves from the havens of comfort, safety, anonymity and calm for the sake of accomplishing a mission, completing a task, or excelling in a competition? 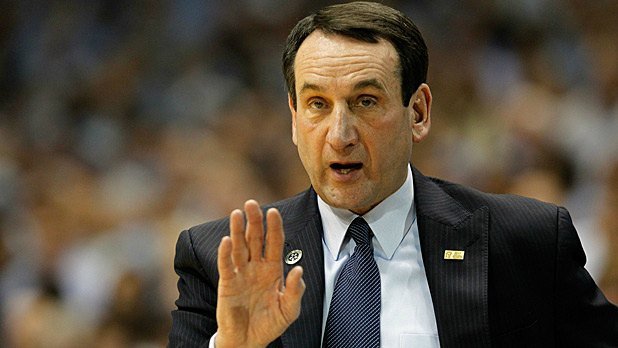 These questions have to be addressed on a regular basis by athletic coaches, military commanders, corporate leaders, teachers, parents, politicians and just about anyone who is put in charge developing, altering or guiding the behaviors of others.

The first element necessary to convince others to extend their talents, energies and abilities is to infuse, in them, the courage to take the necessary leap. This principle was highlighted by a recent anecdote in NCAA men’s basketball. The record setting Head Coach of the 4th ranked Duke Blue Devils, Mike Krzyzewski, was preparing his very young squad for this season. Duke starts three freshmen this year. Mickie Krzyzewski, Mike’s wife of 46 years, partner [almost an assistant coach] and advisor, was talking to Coach K about motivating his young charges.

She said to him, “Mike, you have to “encourage” them”. He answered, “I know; I give them lots of support and reinforcement on the practice court”. She went on to say that was not what she meant. She said the verb “to encourage” really means to give others the courage to take on scary propositions. A light bulb went off in his head and he modified his approach towards his rookies. I believe many of us misunderstand what it means to offer encouragement.

See also  It Sucks being the Oldest Sibling!

Text books on Leadership and Human Resource Management can provide one with many theories and concepts that ostensibly lead to effective motivation. Maslow’s pyramidal “Needs Hierarchy” depicts the five steps to “actualization”. McGregor’s Theory X and Theory Y dissect the two ways managers think of their subordinates and how they contend with them. Hertzberg has his “Motivational Hygiene” that proclaims that you have to solve the “Hygiene” of a task [working conditions, pay, job security] before you can accomplish the “Motivation” [achievement, learning, advancement].

McClelland has his “3 Needs Theory” [achievement, affiliation and power]. Vroom has his “Expectancy Theory” that encourages behavior patterns that ingrain the expectation that additional effort will lead to additional rewards. Even the guru of excellence, Jim Collins, weighs in on motivation in his 2001 opus Good to Great. He suggests that all you really have to do is hire great people. He states that they are self-motivated and don’t need external motivation.

All this theory, particularly Collins’, is largely crap. I had a wonderful English professor in High School who wrote over the top of one of my precious essays, “Pious Piffle!” And, that’s what most of these over-thought principles say to me.

You can motivate basically in only two ways; with fear or with love. And, most organized religions attempt to alter behavior and adapt conduct with equal doses of both. For me, a scriptural description of a fear inducing God that is also a beacon of love is one of the more difficult theological precepts to accept. The Islamic promise of Jannah [paradise] with 72 dark eyed houri [virgins] seems a lot more attractive than a nebulous Christian heaven.

You can motivate with fear, and it can be incredibly effective. It produces results; and stress; and resentment; and lousy morale. But it will get you higher profits, or capturing a hill, or winning a game, or setting a record, or adherence to a curfew.

You can ask most athletes who participate in team sports what drives them to high achievement and they will invariably tell you that they compete for their teammates. Not their school or their team but for the brothers or sisters they lovingly bond with. Anyone who has led troops in battle knows that patriotic motivational speeches are worthless; soldiers fight for the love of their buddies.

The prototypical coaching motivator was Knute Rockne, the football coach at Notre Dame in the early 20th Century. He is immortalized in the 1940 film, Knute Rockne, All-American. With Pat O’Brien playing the title role, and Ronald Reagan as the star Irish back, George Gipp, Rockne’s locker room speech at half-time of the 1928 Army game is a tour de force of motivational manipulation. “The Rock”, under a blanket in a wheelchair, tells the story of what George Gipp told him on his death bed. He asked Rockne that he ask his team, on a day they were downtrodden and about to lose an important game, to win one for “the Gipper”. Love for an old teammate who died prematurely. They of course charge out of the locker room and defeat the West Pointers.

Two interesting, real-life post-scripts. First, there is no evidence that George Gipp ever uttered those words. And second, Rockne was known as one of the most tyrannical athletic coaches in history. His players were terrified of him.