What do Monica Lewinski and Pete Rose have in common?

Both made big mistakes several decades ago. For both, their transgressions offended the moral indignation of the self-styled pure of heart. Both have paid a huge price in the cruel marketplace of celebrity pundits and voyeurs. Both were guilty of “going down”: Rose on his preferred sports betting choice of that day; Lewinski on the 42nd President of the United States. Both are now asking for re-instatement: Rose by the newly installed tenth Commissioner of Major League Baseball, Rob Manfred; Lewinski by the arbiters of public opinion.

They have taken two different paths on their journey towards redemption.

Lewinski began her quest last June in an intimate and revealing article in Vanity Fair. She is attempting to get her life back after years of living down the humiliation of being “that woman”. Actually, that is one of the more benign ways that she has been described. The Wall Street Journal called her the “little tart”. The ever genteel New York Post delighted in describing her as a “portly pepper-pot”. She has endured such sobriquets as “slut”, “ditsy”, “predatory”, “twerp”, and worse.

The demonizing got so ubiquitous that Lewinski, after a brief fling as a ladies’ handbag designer, went into hiding and ultimately left the country. She earned a Masters of Social Psychology degree in 2006 from Mick Jagger’s alma mater, The London School of Economics. She has become a poised, forty-something, wiser woman who today wants to lead a “normal” existence.

Several weeks ago she delivered a polished, 22-minute TED Talk on “the culture of humiliation”. She discussed what it was like to be young, star-struck and in love with her boss. Her rhetorical question “Who has not done something they have regretted at age 22?” certainly resonated with me.

She retold a humorous anecdote about being “hit on” recently by a frisky 27-year old. He promised to make her feel 22 again. She went onto ruefully state that she probably was the “only person over 40 who does not want to be 22 again”.

Lewinski has endured decades of cyberbullying and hypocritical moralizing. She is an intelligent, attractive adult who has paid an unfair and disproportionate price for a youthful indiscretion. Her “outing”, a first for the merciless Drudge Report, marked the beginning of the era of media homicide that we now find ourselves in. The “slut-shaming” of female celebrities is just another noxious aspect of modern sexism. The male protagonist, the perverted Bill Clinton, got away with an impeachment slap-on-the-wrist, and leads a multi-millionaire’s good life, replete with influence and adulation. Not fair; not right. 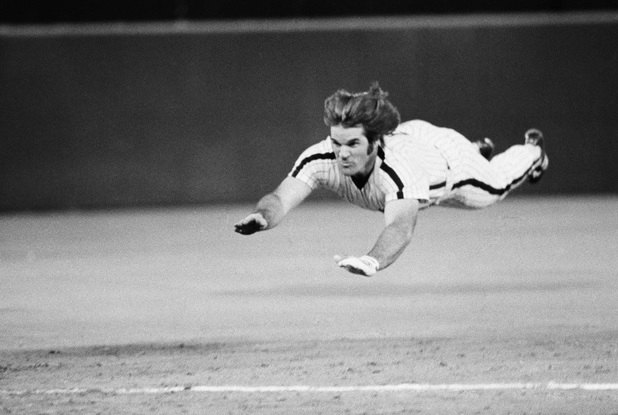 Rose has taken a different path in his interregnum.

He is the reigning MLB record holder in lifetime base-hits, with 4,256. He had a colorful career marked by aggressive play in the field and on the base paths. Nicknamed “Charlie Hustle”, he broke the catcher Ray Fosse’s shoulder in a violent head-first slide at home plate during the 12th inning of the 1970 All-Star game.

In the off season of 1989, Rose, then the field manager of the Cincinnati Reds, was questioned by the outgoing Commissioner, Peter Ueberroth, and the incoming Commissioner, Bart Giamatti, about alleged gambling activities. Ueberroth dropped the investigation, but, Giamatti resumed the probe three days after taking the job. He hired NY lawyer, John Dowd, to investigate these charges and Dowd delivered a summary of his findings in May. The report documented his alleged bets on 52 Reds games in 1987, where Rose supposedly bet a minimum of $10,000.00 a day. Others have reported the true number was more like $2,000.00.

After initially denying the charges, and fighting them in court, Rose accepted a permanent place on baseball’s ineligible list; effectively a life time ban. Under baseball’s rules, he is allowed to apply for reinstatement.

There is no doubt about Rose’s guilt. Dowd characterized him as a “habitual gambler and probably a full-blown addict”. It is interesting to note how benevolent Major League Baseball has become in recent years with issues of addiction. Many justify the draconian punishment meted out by Giamatti by mentioning Rose’s denial of his actions. It took him until 2004 to finally admit only some of his misdeeds. However, those who know something about addiction will tell you denial is almost always a component of the disease.

Rose has comported himself like a lout in the intervening years. He was charged with tax evasion. He has become a “memorabilia whore”, constantly on the card show circuit. He will sell his autograph on just about anything. But, he was guilty of illegal gambling; just like Michael Jordan; or Charles Barkley; or any one of a number of other sports stars who never faced the same punishment. He was also guilty of lying; just like Alex Rodriguez; or Raphael Palmeiro; or Bill Clinton; or just about every politician we vote into office. And, none of them got the “death penalty”.

What both Pete Rose and Monica Lewinski have in common is that they are both guilty of the crime of not being very likeable. And, in the eyes of the media celebrity machine-gunners, this is the most grievous felony of all. They have assailed and excoriated this duo with venomous language and poisonous incivility. And it’s time this unfairness stop. Rob Manfred, let Rose back into the fold. TMZ, let this aggrieved woman be.