This is Part 2 of a multi-part article.  Please read Comprehensive Recovery Training for Athletes [Part 1] first.

In part #1 of this series I discussed the first half of passive recovery modalities that athletes can and should use on a regular basis, and now let us analyze the rest. 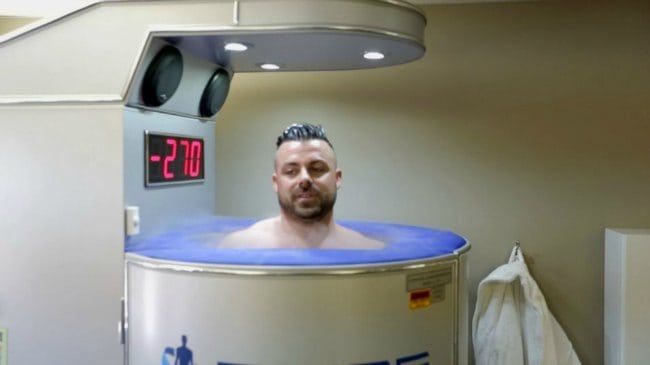 “The vasoconstriction effect of cooling tissue makes the superficial cold application an effective modality to reduce pain and swelling and edema following trauma. In addition, therapeutic cold can be used to inhibit spasticity, to facilitate muscular contraction for various forms of neurogenic weakness, and for muscle re-education.” [1]

Cold packs and immersion are the most common forms of ice treatment. Bret Contreras shared an article on his site which examined a study conducted on nearly two dozen professional rugby players. The study was intended to see how different recovery options affected a series of functions, such as (i) Creatine Kinase Levels, a.k.a. The marker for muscle damage and soreness), (ii) jump performance, and (iii) individuals own perceived level of muscular soreness.

Aside from the study I just provided you compliments of Bret, every study or article I researched supported contrast for increasing superficial blood flow, which could only help recovery efforts. There was one large systematic review that analyzed all 28 articles on the topic of contrast baths dating back from 1938 till the present, and it also advocated contrast baths as an effective means of increasing blood flow. [3]

Lastly, just look at how many professional athletes utilize ice and contrast on a regular basis. Perhaps there exists a placebo effect to some extent, but why would they subject themselves to such torturous techniques if they weren’t working somehow physiologically.

I think cat naps suck, but I have too many of my athletes and co-workers that participate in them on a daily basis. Perhaps it has to do with circadian rhythms and genetic factors, I’m not sure, but I just feel exhausted by them for some reason. The common claim over the years from coaches and trainers are increased releases of Growth Hormone during the nap period, and I found a study to confirm it. [4]

Try it out and see how you feel because it may help as Growth Hormone is clearly involved in strengthening tissue. [5]

I first heard of this one from world famous strength and conditioning coach Joel Jamieson. Joel is a very bright guy and used to be part of the Seattle Seahawks staff. Joel notes that the sauna can increase activation of the sympathetic nervous system. The sauna is important for individuals who are more aerobic or long distance dominant. Often this type of athlete can suffer from parasympathetic dominance and all of its associated symptoms, such as decreased heart rate, blood pressure, and respiration rate.

By integrating a sauna into the mix, you can help balance out signals sent from each branch of your collective nervous system. There was also a study I found that showed a mist sauna can help someone recover from local muscle fatigue. [6]

I should note that this doesn’t pertain to most athletes, especially in team sports, but I think it may serve great for an athlete who is in-season where workloads and volumes are ridiculous. Also, when the training naturally tends to decline in intensity since there is such high level so fatigue and such.

I am not a physical therapist, nor do I understand the full effects associated with ultrasound treatment, but I did work as a technician for a couple years. I got to witness firsthand how this technique can help loosen up scar tissue and increase blood flow.

Please note that this modality should only be used in the care of someone qualified and licensed to handle and administer this form of treatment. If you have access great, if not then I suggest you search one out.

“If used with care, deep heat, such as ultrasound, can be effective by increasing the extensibility of tight connective tissue, thereby increasing blood flow.” [1]

Just as was the case with cat naps, I didn’t respond very well to an Epsom salt bath. I nearly fainted and passed out when I submerged myself in a bath sprinkled with this stuff, but I later found out my mother and I are allergic to sulfate based products.

Nevertheless, Epsom Salt Baths can be great for neural recovery due to the fact they contain Magnesium. Minerals can have a sedative effect and induce pure relaxation that is essential following high-intensity training endeavors like sprinting, agility, jumping, lifting, etc.

In the next article, I will discuss all of the potential positive effects associated with various forms of nutrition and their specific and scientific role in the recovery and regeneration process. Stay tuned!