I love the city of Baltimore.

I attended University of Baltimore Law School in the late 60’s. I became a fan of the Orioles when they had two Robinsons and a gentle giant named Boog. Manager Earl Weaver perfected the art of the theatrical rant and grew tomatoes in the bullpen. They had four starting pitchers {Palmer, Cuellar, McNally and Dobson}, all of whom won twenty games in the same season. 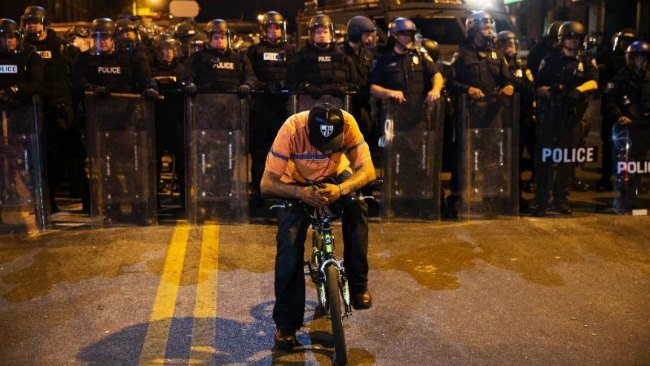 I ate blue crabs at Obrycki’s and pasta at Sabatini’s. During one of my periods of bachelorhood I had a fourth-floor walk-up in Bolton Hill before it was gentrified. The Mayor, at the time, was Tommy D’Alessandro, who was Nancy Pelosi’s brother.

This week the city erupted. As a consequence of the cruel and lamentable death of Freddie Gray, who died of a spinal cord injury while in police custody, the streets were filled with the usual conflagration of peaceful protestors, rock-throwing malcontents, greedy looters, soundbite-seeking grandstanders, and more attending members of the media than at last year’s Super Bowl. It was Ferguson, Missouri, all over again. Protestors and police were injured, businesses were ransacked, and fires were set at a community center, a CVS, and at Mondawmin Plaza Mall, where I had once shopped for a pair of Chuck Taylors.

And, in a repeat of recent events, this social pain-point is being viewed through the lens of sports. Corporal punishment of adolescents [football], drug usage [baseball, track and cycling], spousal abuse [football, again}, gambling [Pete Rose], and corruption [international soccer] have been the subject of incidents and conversations that involved athletes and sports executives. This one was no different.

We heard about the cancelled Oriole game before we heard that schools would be shut down. We were told that the Tuesday afternoon game would be played without a paying audience but we never heard whether public libraries would be open. And, they informed us that the weekend’s games would be played in St. Petersburg instead of Baltimore before they discussed the details of the deployment of the National Guard.

The most intelligent and articulate statement about the crisis came from the Twitter feed of John P. Angelos, COO of the Orioles, and son of Peter Angelos, the owner. In his reply to a tweet from broadcaster Brent Hollander, Angelos took the opportunity to brilliantly defend the protestors. His statement should be required reading. The most effective and impassioned exhortation to the community to remain calm and non-violent came in a remarkable video by Ray Lewis, retired linebacker of the Baltimore Ravens. These persuasive additions to the public dialogue came not from politicians, or sociologists, or criminologists, or pastors, or columnists, but from a jock and a sports “suit”. Even Carmelo Anthony of the Knicks came across as a thoughtful and caring citizen in his Instagram post stating that destruction can happen instantly but it takes forever to build something.

The business of sports has taken a curious turn. Its denizens have gone from inarticulate participants in irrelevant activities to credible actors in and commentators of contemporary culture. The business has a platform and a megaphone. It is frequently the first source the public seeks for action or a reaction. The responsibility is immense.

Last Friday, Diane Sawyer conducted an extended interview with Bruce Jenner, former Olympic Decathlon Gold Medalist, and current reality show star. In the interview, Jenner came out as transgender. Despite the fact that in the interview Jenner stated, “I’m a woman”, he has also requested that masculine pronouns be used until he announces a change. I will abide by his request.

Let me be clear about one thing. Sawyer was absolutely awful in the piece. She was awkward, unhearing, insensitive and in many ways naïve. Jenner, on the other hand, was spectacular. He dealt with one of society’s points of pain with dignity, candor, and spontaneous emotion. It was killer TV.

I have known Bruce Jenner for a number of years. I had the opportunity to spend the better part of a day with him one time in Hershey, PA. He is intelligent and thoughtful. He has an eccentric side to him. But, mostly I found him to be very unhappy. I hope that through this arduous process of change that he finds some serenity, peace and happiness.

If Jenner were an insurance salesman, or a ballet dancer, or a hedge-fund manager, or a plumber, his declarations would have significantly less impact. I believe that through his courageous revelation we have possibly reached the beginning of a tipping point in the conversation on transgender. And, because our expectations of this superb star athlete are so different from his reality, we may be urged to consider a different point of view. Perhaps we can curb our fears and become more accepting.

Two serious and important issue have invaded the marketplace of ideas. Some of the more meaningful comments are emanating from the kiosks of sports. And they say that all we do is play games.