You are here: Home / Doug Logan / The Tulips Are Out [SHIN SPLINTS 2015]
7
SHARES
FacebookTwitter

The month of May is bracketed by two floral parentheses. The month begins with the bursting of tulips and ends with the lusty blooming of ant-infested peonies around Memorial Day. In between we will see and smell lilacs, hydrangea and iris.

In the tropics we have experienced the all-too-short flowering of the jacarandas. Right now, the gardenias have spread their fragrance throughout the neighborhoods. From a botanical standpoint, the month is almost pornographic. 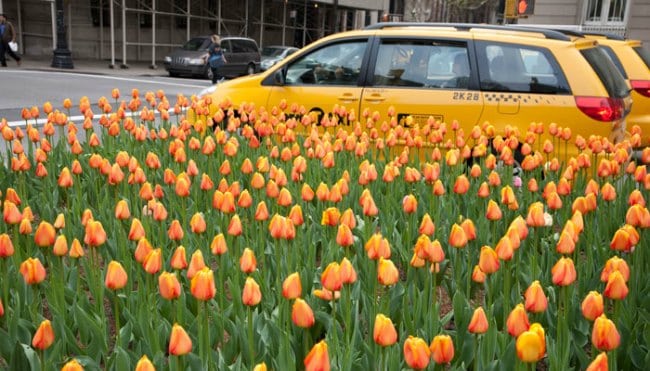 The only way to experience this joyous bounty is by walking. Not by driving, not by running, not by taxi, but by walking. And, communities that don’t facilitate the pedestrian experience are uncivilized and barbaric. Take the state of Florida. It beckons bicyclists, runners and walkers with year-round sunshine. Yet it is the unsafest state in the country. Last year 498 pedestrians and 135 bicyclists lost their lives in this little piece of heaven. There were 7,467 pedestrian injuries and 6,520 cycling injuries. Welcome to the Sunshine State. But, if you want to stay safe better travel by car

Take my neighborhood, for example. No sidewalks. You are not welcome to walk here. As a matter of fact, you are not welcome at all. And, if you want to dawdle you would do well to research our gun ownership statistics. Most residents have a weapon for every occasion.

Last week I took a marvelous walk in New York. The flowering trees in Central Park had just finished their spring celebration and it was the turn of the tulips. I spent a moment at one end of the American Elms to admire a bed of purple and white. I noticed, for the first time, that the statues of Shakespeare and Columbus were facing each other and that they appeared to be talking to each other. If, in fact, they could have spoken, what would they have said?

Later that day, my day off, I visited the Museum of Modern Art, where I am a member. I had a salad in the café and then visited the new Bjork installation, including a video piece, commissioned by MoMA, called “Black Lake”. I am intrigued by this creative, yet wacky, artist. Some of her work I hate; other stuff I find really good. I then spent an hour reading in the afternoon sun in the sculpture garden. There the beds were planted with very patriotic red tulips and blue ground cover.

New York is the most walkable city in the world. Walking is such an important part of its ethos that The New York Times, on April 26th, devoted an entire volume of its Sunday Magazine to the topic. The photography is terrific and the stories, from the perspective of the pedestrian, are intriguing. Nathaniel Rich, in his opening essay, describes the history of walking in New York. He writes:

“New Yorkers have an attachment to walking that borders on the metaphysical. Walking is not merely a way to get around New York. It is the way to be a New Yorker.”

He goes on to say:

“New Yorkers are prideful walkers. They walk purposefully, even if the purpose is simply to walk. You never need to ask New Yorkers where they’re going. They’re already there.”

In the same publication there is a hilarious piece by Steve Duenes titled “How to Walk in New York”. He includes a litany of “don’ts”. They include:

Let me finish by telling you, who may not know, that the sidewalks of New York are bejeweled. That’s right. The bedrock of the city is Manhattan schist, which is heavily imbedded with mica. This beautiful rock is part of the aggregate added to Gotham’s older sidewalks and it gives them their unique sparkle.