In a recent interview with ESPN, Usain Bolt said just prior to his 200m in Ostrava:

“The 200’s my favourite event. I really focus on trying to run faster over 200. My aim is always gonna be the 200 meters. That’s one of the biggest goals of my life.”

“My start is always crap as everybody knows, I still have to work on that. The 200 meters, it’s just work on little things on the corner and coming out of the corner and dropping my shoulders. I’m just trying to get everything together, leading up to the world championship. As long as everything comes together there shouldn’t be a problem.” 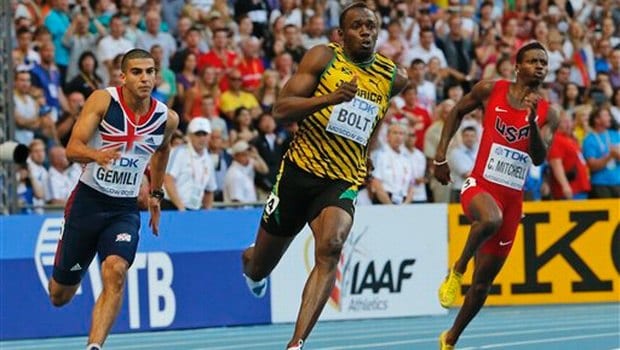 What did he mean by “dropping his shoulders”?

When I first started racing the 200m, I was told to dip the shoulder to gradually lean into the curve.  This was usually one or two strides just before entering the curve,

But years later, I realized that the only adjustment you need to do is tilt your head with the chin pointing down a tiny bit.  Thus the hips and shoulders will follow.  Your body will naturally lean into the curve.

Out of the starting blocks, the first few steps are a straight line until the curve begins..

In the picture above, take a look at American-born-Italian Andrew Howe on the right.

Note his body is leaning, with hips and shoulders in excellent running position.

His head is nearly straight, but he is leaning.  If you straighten him up (using Photoshop), what will you see?  His head will be tilted with the chin slightly down.

If you don’t believe me, check out Usain Bolt’s head tilt in the first image (above).  Or Adam Gemili’s head tilt for that matter.

The term dropping the shoulders is really the end result (or effect) on how to properly run the curve in the 200m.  How you do it is another matter.

Of course, the final tip is don’t raise or straighten the head until you reach the straightaway.