You are here: Home / Coaching / Jimmy Vicaut – First 7 Steps is the Secret to sub-10?
517
SHARES
FacebookTwitter

The first cut is the deepest, and the first 7 steps are the secret.

In the 100 meter sprint, why are elite sub-10 sprinters taking 7 Strides for the first 10 meters?

In the Facebook video from Guy Ontanon, he showed 3 video clips of Jimmy Vicaut’s progression of his 100m time in relation to his 7th step: 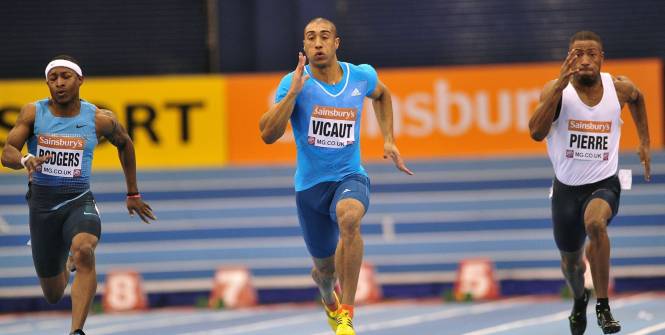 Thanks to the USATF’s Andy Ferrara, I analyzed some high speed videos of Beijing’s 2008 Olympic 100 meter final.

When I take a look at the video (which I can’t post because it’s property of the USATF), and compare their splits, you will see Richard Thompson hitting 10 meters in exactly 7 steps.  Thompson’s split was 1.80 compared to Bolt’s 1.85, but Usain Bolt took a little over 6 steps.   (in Berlin 2009, Bolt was 1.89 for the first 10 meters)

I don’t need to do the rest of the math as we all know the outcome.

Sure, Bolt is taking LONGER to reach a fixed number of strides (i.e. first 10 strides = 2.62 seconds compared to Thompson at 2.50 seconds!), but last time I checked, they gave gold medals for the fastest time over 100m, not 10 strides, or 41 strides for that matter.

Somehow, the sweet spot (or PB or WR) lies somewhere in between your stride rate and stride frequency.  Coupled that with tremendous power on the ground while you have ground contact.  There’s nothing you can do while in the air unless you have wings.

With the emergence of Bolt, we have a new group of people advocating the longer stride theory again.

We can go back as early as Bud Winter’s group with the longer strides theory, which can be clearly demonstrated by Tommie Smith.  Refer to his book, “So You Want to be a Sprinter?”  (Side note: Bud Winter actually advocated 3 rules, the other two were higher cadence or “leg speed”, and maintaining your top end speed or “speed endurance”… like this Blog :)

Take a look at Carl Lewis or Mike Marsh videos from the 1980s and 1990’s and you can see the long stride theory made everyone rethink their mechanics.

Then Andre Cason showed how a fast cadence with shorter strides could do the trick.  When Maurice Green dominated the sprints, he (and John Smith) had us believing it was all in the cadence.  Even today, Walter Dix took 48 strides!

Dwain Chambers has his theories on how to beat Bolt.  From this older article:

Chambers, who says that “attention to detail” in coaching has been the key to Jamaica becoming the sprint capital of the world, is confident of beating Bolt in 2009.

Plus running relaxed, of course!

If you want to sprint fast, then you might as well imitate the experts, at least to a certain degree.  Before you can reach a certain speed, you have the the pre-requisites of strength, explosive strength and Elastic/Reactive strength first!  You can look up Al Vermeil’s Hierarchy of Athletic Development and see what I mean.  For Elastic/Reactive strength, see Driving Resistance Band Training with a video from Remi Korchemny.

You can, however, easily bound for 7 steps to 10 steps, but that will take too much time.  You are trying to cover ground as fast as possible.

Bring Back the Wicket Drills?

Read Increasing Stride Length: Lance Brauman’s Wicket Drills from 2011, or Vince Anderson’s Sprint Acceleration and Maximum Velocity from 2009. (sorry, Vince does not give away his acceleration chart, but I am working on my own version as we speak.  Watch this space.)

It’s All About Shin Angles Again

When you leave the blocks, keep the heel low until the shin is about 45° to the ground.  Then drive the foot down landing on the ground just behind the body’s center of mass (COM).

In the next 7 strides, the angle of shin of the front leg will increase by 6 or 7° per stride so that by 10 meters (or 7 strides) the shin is vertical to the ground.

Your body shouldn’t be completely vertical at this point (i.e. not standing up, though most Masters and Youth athletes do this, and even myself on a bad day), but there is a still a noticeable forward lean.  Note the body angle increases from about 45° from leaving the blocks to about 30° degrees or less… so that’s about 2° per step moving forward.

When you train short to long, you do Acceleration Development in September or October.  These little things matter today.

So as far as speed work goes, we work on acceleration development all year long, and I usually look at the first 10 meters or 7 steps to analyze and dissect where I can improve.

But how about the first 2 steps?

With todays high-definition cameras and video analysis software, we can do things today that didn’t exist 20 years ago.

Team GB Coach Steve Fudge said in a recent interview with Simon Hart of the Telegraph:

“We saw at the Diamond League [Birmingham meet] that he had a little flinch in the blocks and his first two steps out of the blocks weren’t right,”

“It’s like the butterfly effect. You make one little mistake at the start and it will filter through the whole 100 meters.We basically worked on James’s first two steps to get them right. As soon as he took one step in his race, Paul [Bryce] and I knew that he was going to do what he did.”

“The reason is that after each meeting we sit down in a room together, look at the race and really focus in on what James can do better,” 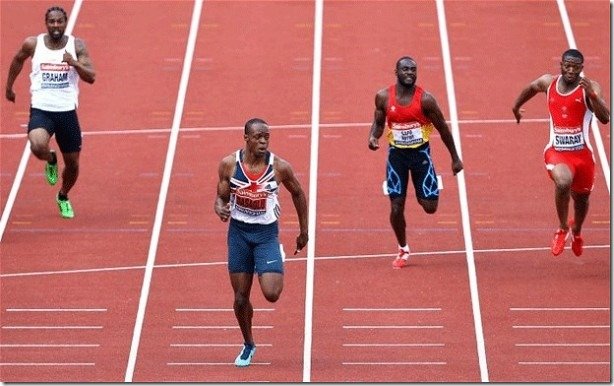 When you start breaking 10.00 seconds for the 100 meters, every single detail has to be scrutinized.  Everything from training load, recovery, nutrition, mental confidence, soft tissue health, and of course, the first 2 steps en route to 45 steps (give or take a few steps)