For those people who have read my previous articles about Justin Gatlin, you will know my views on cheats convicted of PEDs.

I’ll also say that I’m quite lenient on stimulants, but to summarise: Athletes receiving bans for PEDs like steroids or testosterone, for example, should be banned for a minimum of four years. And that is only for those who cooperate, and they should never be trusted again (more on this later).

Athletes banned for stimulants, some of which are legal out of competition, should receive shorter suspensions. I think the semantics are very important as people get confused when they hear statistics like “7 of the nine athletes in the 100m finals are convicted dopers”. It is misleading.

However, I’ve also been accused of being anti-Gatlin because he’s an American. What about English athletes, people ask? I’m not the BBC, who are far too partisan, I feel. I would go after a current British drug cheat just as hard as an American one. 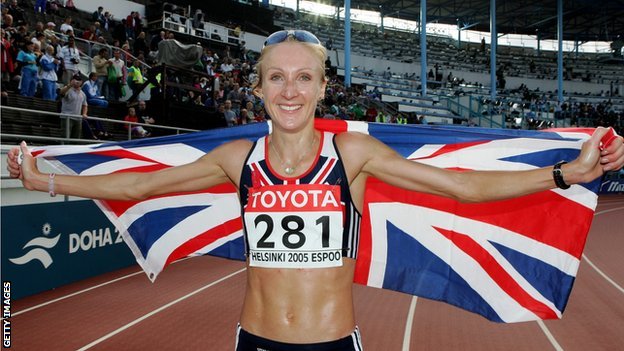 So, what about the Paula Radcliffe situation?

I think people get too hung up on whether people are innocent until proven guilty or vice versa when it comes to drugs in sport. My friend Craig Pickering has strong views about this and is definitely on the side of innocent until proven guilty. He has more experience than me of being an athlete, of course, but I always apply the same test (and Craig has challenged me on this exact point): What if it was my son?

Well, here it is.

The world of doping has changed, and we have to accept it for, what it is. Trying to pretend it is otherwise is fruitless. The simple fact is; Lance Armstrong (and Marion Jones) changed the world.

When there is suspicion in this day and age, post-Lance, then it is incumbent on the athlete to either prove their innocence or accept the media scrutiny and innuendo. From a legal and official perspective, they are clearly innocent until proven guilty and would be perfectly entitled to say nothing and continue regardless while there is no evidence against them.

Paula Radcliffe was perfectly entitled to do nothing at all. There are no failed tests; there is no official sanction. She can ignore it if she wishes, no-one can force her to do otherwise.

However, if there is suspicion raised, whatever the source, it is incumbent on the athlete to do what is necessary to silence that suspicion effectively in the media. Regardless of the rights or wrongs of this statement and claims of injustice or privacy, it is the nature of ‘the world we live in”.

Cycling is no different. Some sports, such as soccer or American football, get away with murder in drugs terms. So what? We aren’t in those sports; we are in athletics. Pointing out test figures for other sports, doping rates, banned athletes and so on is of no interest to a fan who is interested in their sport.

Paula Radcliffe’s issue is even stronger because she is a public/media figure. In my humble opinion, here advisers have got it wrong. We’ve been here before with Lance. When this thing broke (and it was Paula Radcliffe who introduced her name into the public domain), it would have been easier to put to bed. The longer it goes on, the more news coverage there is, and more and more people start to frown.

See also  Succeed through Passion, Honesty and Pursuit of Excellence

“I can’t publish data because you won’t understand it,” doesn’t cut it.

More and more people start to ask “Did she?”.

The same would go for Mo Farah, Greg Rutherford or anyone else who posted suspicious data (for the record, whoever advised Farah to stay with Salazar may regret that decision). It has to be nipped in the bud by trusting in the public to understand. Calling us idiots and treating us like fools, a la Armstrong will make things worse.

So, for me, in official terms, people are innocent until proven guilty.

No-one should be banned for a suspicion. In terms of testing, though, anyone with suspicion should be pursued by the authority as though they were guilty until the suspicion goes away. If that offends them, tough. If a few people being offended is the price of a cleaner sport, then take a man-up pill and get on with it. For the public, though, if you want a public persona, then you have to manage it.

The media can work on suspicion (and as David Walsh has proven, sometimes it should pursue that suspicion beyond reasonable realms) and will continue to do so. And it is down to the athlete, or their management, to eradicate that suspicion. Doing it by libel threats, evasion and attack will not hold any water. We’ve been there before.

Believe it or not, I am an optimist. I believe Usain Bolt, Mo Farah and Paula Radcliffe are all clean. But it is that very optimism that fuels my stance. If I’m let down and betrayed (along with countless other fans), then the punishment should be severe. Additionally, that athlete should never be trusted again. They don’t get to play the “I’ve served my time, can we all leave this behind” card.

If they serve their ban, then they are allowed to compete again. That’s the deal. But trusted to compete clean?