Congratulations to Dafne Schippers with her 7.08 at Karlsruhe 2016.

Did anyone notice her asymmetrical starting block technique with her hands?

Her right hand is several inches behind the line, as compared to the left hand which is directly behind the line?  In fact, this is how I set up my blocks when I use blocks. 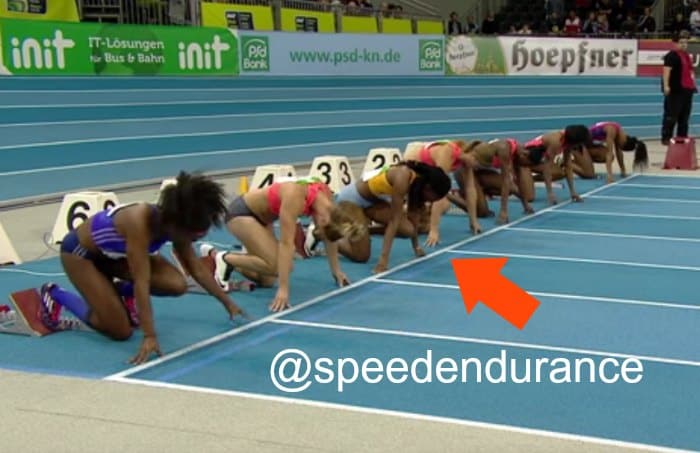 When I updated the original Rocket Sprint Start book by Bud Winter, I only covered the use of starting blocks, and to some degree, the Moye starting block.

But I only discussed symmetrical, not asymmetrical methods.

Click here on How to Do Different Starts… 2 Point, 3 Point, Falling Starts and more!

In the book, I talked about cues, and one of the important queues is the LEFT hand exploding upwards with your RIGHT foot on the rear pedal. The brain receives the signal from the gun, and the left hand moves a fraction of a second before the right foot. (the difference is minuscule, but you can’t argue with science!)

I used to wear a watch on the left hand as my cue to move first, and sometimes I would have my right hand about an inch behind the line. This “forced” me to flick the left hand and arm forward. You can argue it’s a psychological effect from starting on the curve where your right hand is always a few inches behind the start line.

Below are two screen shots of Jeff Demps’ starting block technique from the 2011 and 2012 NCAA D1 Track and Field Championships. Note how his right hand is positioned an inch (or two) behind the start line.

This could be a cue for his left hand, and possibly from the standard 3 point start used in the 40 yard dash football combine. We’ll have to wait until I speak to his coach :)

Adarian Barr has been promoting asymmetry for years – maybe he is on to something?  Our bodies nay appear symmetrical, but obviously, they are not. 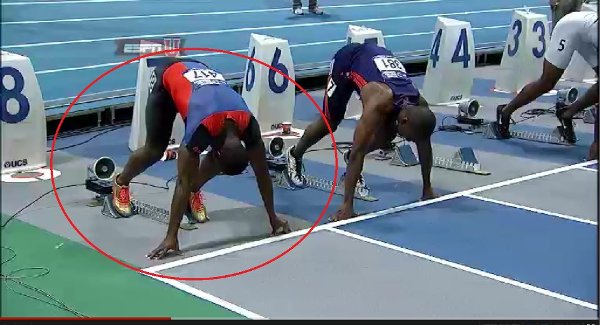 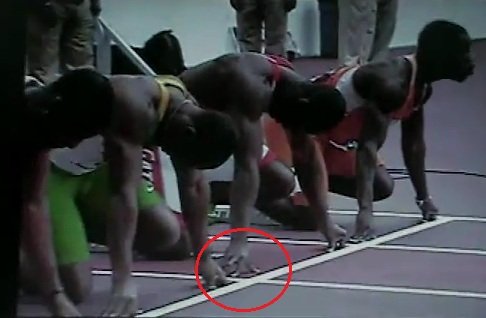