This article is guest blogged by Mal Hindmarsh, a sports and nutrition enthusiast, working as a nutritional advisor for both amateur and professional athletes up and down the UK.  Over the last few years, his work has seen him move more into the field of natural and organic health solutions, where he acts as an advisor and ambassador for various innovative health start-ups.

Recently one of my clients phoned me up in a mad panic, as he had ‘heard a ripping sound’ at the back of his knee, whilst sparring, and was due to fight for a title on the K1 martial arts circuit a fortnight later. After being informed that he wasn’t walking very well on it, I suggested that it would be a good idea to cancel the bout. He insisted this wasn’t an option and arranged an immediate appointment with me to discuss his nutritional options, as well as an appointment with his physiotherapist later that day.

It got me thinking about the subject of sports injury, whether it be delayed onset muscle soreness from a heavy training session, an ergonomic related work injury, or like in this case, a sudden twinge or pull. What was the best advice I could give to someone to treat this different kind of muscular problems, in order to reduce pain and aid long term recovery? The client I was expecting a couple of hours later just wanted a temporary fix, so should I advise he goes to the GP or doctor and asks for some strong NSAIDs, or could this injury still be looked at from a nutritional perspective, even in the short term?

When he arrived we discussed the injury and from what we could assess, there had been some twinge around the lower hamstring area, but everything seemed to be in the right place! He was left with some inflammation. I considered the amount of time that remained before his fight and decided to advise he avoid NSAIDs altogether, intending to focussing his diet entirely around anti-inflammatory foods and natural supplements.

Reasons Against NSAIDS for Sports Injury

My main issue with the use of NSAIDs for pain relief from a sports injury is that they interfere with our bodies natural ability to fix injuries itself. We create inflammation to protect our cells and tissues from damage, so having excess anti-inflammatory medication in our bodies for this kind of issues is slowing down our recovery process.

The other issue to consider are the side-effects of long-term use. Although the risks are extremely low for occasional periods of short-term use, long-term use is heavily linked with stomach ulcers and kidney failure. Many athletes also claim they find it harder to stay hydrated, both during and just after extended use of NSAIDs.

There are such a wide variety of foods and supplements available, making dietary choices has never been simpler. The strongest argument for looking at sports injury from a nutritional angle instead of medicinal one, is down to longevity. If you have a work related injury, it is going to take time to fix through physiotherapy and ergonomic changes. Are you going to take medicine the whole time in the hope that one day you’ll sort the problem out and you’ll stop relying on them? What if you are a dedicated lifelong runner? How many tablets will you have consumed over the space of a decade if you are taking them morning, noon and night, just so you can train every day?

As athletes, the benefits of adding anti-inflammatory foods and supplements to your diet extend way beyond a little bit of pain relief. Each flavour and colour bring its unique set of active ingredients, so the anti-inflammatory effect these foods have on the body is produced in many different ways. The high levels of bromelain present in the stems of pineapples have been used to reduce swelling after surgery for centuries. As well, the levels of quercetin within lingonberries acts not only as a powerful anti-inflammatory its own right but is said to increase significantly the bodies uptake of other important nutrients, which often struggle to absorb into our blood. Adding a variety of different foods and natural anti-inflammatory supplements to your diet won’t only help you manage your niggling aches and pains, but will aid digestion, support your heart, and promote overall health.

When offering advice to my client, I took into consideration some factors. Firstly, this is a guy who fights regularly for his livelihood, so he is both prepared and well versed in doing so whilst carrying various aches and pains. The second consideration is that he was in the process of shedding some pounds to make his weight category. He would be unable to train at all for at least seven days, so whatever my plan would be, it would have to contain minimal calories for him to continue dropping weight.

This is what I advised him to supplement his diet with every day for the remaining period before the fight: 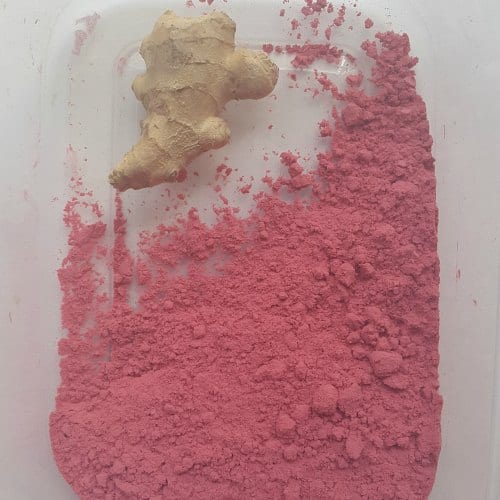 After day five my client called me to tell me that although the pain was still there, it had subsided significantly. This is where it gets interesting. He went on to tell me that his weight was already down to where it needed to be, so was delighted that an often energy zapping panic that usually lasts right up to the point of stepping on to the scales, wouldn’t be necessary.

By the time of the fight he was relatively pain free and won the title by stoppage in the final round. He is still supplementing his diet with Lingonberry Powder and root ginger, although he has reduced the amount by half.

If you are interested in trying Lingonberry Powder, use the coupon code speedendurance30 for 30% off the product or basket.