What a great 9 days of competition.  Perhaps the reason why it’s so special because it’s every 4 years? These are, after all, the Olympic Games, where once upon a time, war was paused to allow the athletes to travel to Olympia safely!

But that also has a negative effect where every little incident will get magnified 100-fold.  Note to athletes: You are under a microscope. For example, the double standard when not putting your hand over your heart during the USA national anthem.  Or lying to authorities of an alleged crime. (I won’t even bother naming the individuals here – you know who the usual suspects are!)

A lot of people asked me why my Blog was so silent during these 9 days.  I was primarily using social media (Facebook and Twitter) to microblog, but the main reason was I sustained a full Achilles rupture the day before Track & Field started!  More on that later, along with several posts on my rehabilitation.

So being home bound, I watched every single live stream, including the marathons from start to finish, the heptathlon & decathlon field events in empty stadiums, and even the race walk!  I’ll admit, I did watch several non-Track events and found the sports exciting, even if I didn’t know the rules.

So here’s the best recap of the 2016 Rio Olympics. Image source: Facebook, but they forgot to credit @pjvazel for the stats!

Getting there is the Journey: The Ronald Forbes Story

Ronald Forbes is a 110m Hurdler from Cayman Island, as well as the flag bearer.  All we see after the Opening Ceremonies is a 14.67 coming in 6th place in the 110mH heats.  Non track fans may think this is a “preliminary round”.

If you haven’t seen his story on Facebook, takes 6 minutes and watch this video below.  (This story reminds me of USA Marathoner Joan Benoit or Canadian rower Silke Lauman)

Let’s see how MY leg will look like after 10 weeks in a cast!

In the first few days of Athletics, we saw 3 field events being won on the 6th and final attempt (Woman’s Shot Put, Men’s Long Jump and Discus)

It’s fair to say, never say never.  It’s not over until the fat lady sings.

My motto is, “Get up, dress up, show up, and never ever give up”. If you are given 6 attempts in the jumps or throws, please use all 6 attempts. Go hard or go home.  These are, after all, the Olympic Games.

… but watch those Hands in the Jumps

Of course, we saw both Men’s and Woman’s Long Jump where the last jump was “shortened” due to hands touching the sandpit before the legs. I’ve seen this before, and even have a very early Blog article on it (Walter Davis 17.71m Triple Jump from 2007).

Yes, heart breaking, but in the heat of the moment, anything can happen.

More of a corollary to the above of “never quit, never surrender”, I would have guessed Men’s Pole Vault and Woman’s 200 meters were “sure winners”.  But, like any competition, even the Olympics, there is no such thing as a sure winner.  Even Usain Bolt was beaten twice in the 100 meters, and I was there in Rome when it happened.

Every time you line up in a race, you have to believe you can win. Just ask Andre DeGrasse. He believes he can be Bolt.  Even in the 1990’s when USA dominated the sprints, many countries including Canadians were “intimidated” by the Americans.  As if they were “sure winners”. Luckily, Donovan Bailey changed that (see Stu McMillian’s blog article on “swagger”).  Today, I think the world is intimidated by the Jamaicans, which probably explains the screw-ups for the USA Men’s 4x100m relay.  Or just plain bad luck. (Or is it the coaching?)

Women’s High Jump… in the Heptathlon

The Heptathon High Jump was held before the Open High Jump.  Now you can’t compare apples and oranges (different weather conditions, etc) but I still would have liked to see these 2 competitors compete in the open HJ, sore muscles and all.

When I saw Lane 8 for the Final, I knew he could win by running his own race, because the gentler curves would actually help him run faster as opposed to Lane 1 or 2.  “Just run your own race” is the most common coaching cliché out there.

But I didn’t expect a WR.  Honestly.  Maybe in Zurich if there was enough $$$.  The 400m has so many variables, and in my mind, it’s really 8x50m segments (or zones as I call it) with ins-and-outs of curves to deal with.

I wrote about that last year, titled How can Wayde van Niekerk run a 400m World Record? (HINT: MJ Secret Workout) and he would need to run 0.10 faster for each 100m segment.  You need speed.  The faster your 100m time, the faster your 400m time. The 400m is all speed reserve. It’s reach top speed very relaxed, then it’s one very long deceleration to 401 meters.

And based on the splits, he achieved just that… each segment being 0.10 faster, slicing off 0.45 his PB for a WR.  Congrats, Wayde, you did good.

Again, these 2 images from Facebook shows anything is possible. 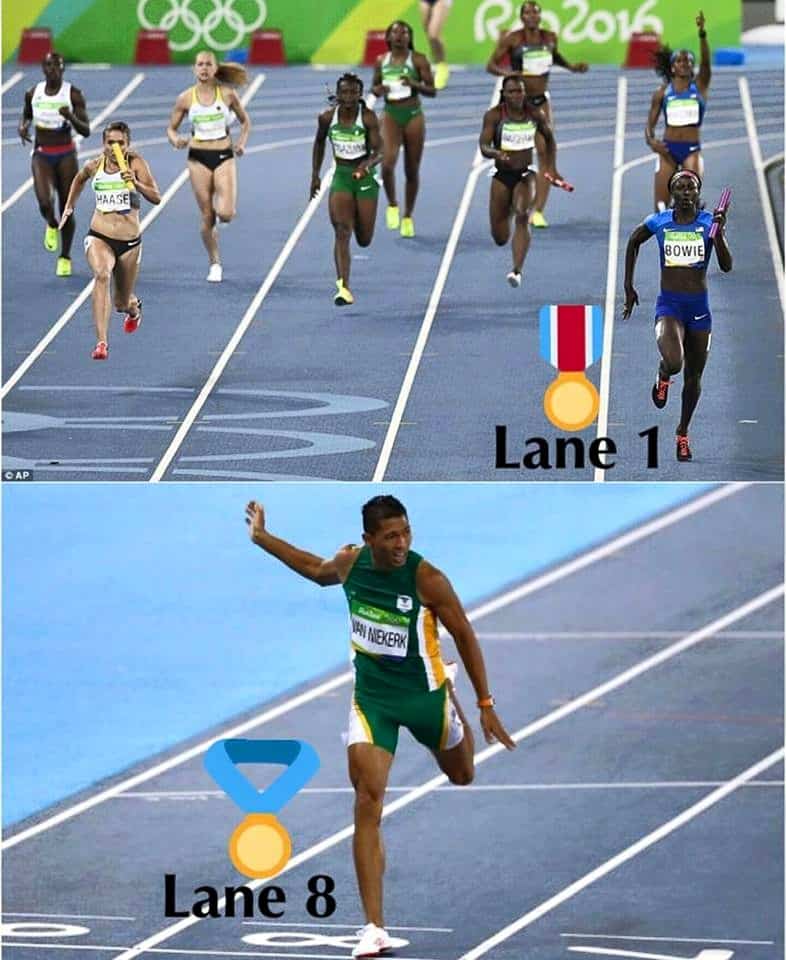 We’ve seen the rise of China and Japan in the 4x100m relay.  It’s not just slick baton passing… you still need 4 fast guys.

But let’s take a look at Canada.  I wrote in a previous article on calculating 4x100m relay potential. (from 2011)  Here was the SF lineup:

Here was the Final Lineup:

In both cases, Canada ran within 0.05 seconds of their potential. It’s up to you if you think Relay Camps are essential or not.

Want more stats?  There were some very clean baton exchanges by Japan, running 37.68 with this lineup in the SF:

Again, on social media, there was a lot of discussion on the differences or benefits of the upsweep (Japan & France) vs the Push Pass.  Here is an article from 2010 that explains the differences:

In short, you need fast guys, don’t lose baton speed on the exchanges, and get the stick around without getting DQ.  Trust your teammates.  And that includes passing the baton too early.

Here was another social media frenzied conversation, and that was the woman’s 400 where the winner dove across the line.  I don’t think it was pre-planned as you could see her losing her balance, but diving across the line (actually, it’s when the torso crosses the line – doesn’t matter where your foot is, or whether your whole body has crossed or not) is a risky calculated affair.

See my article on Photo Finish: How to Read a Finish Line Photo 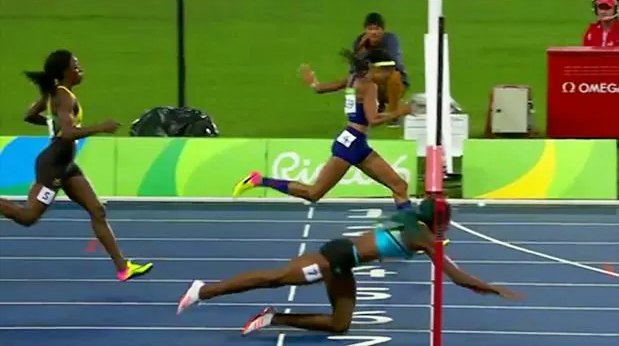 But I did find the television commentators funny… “Shaunae Miller should get 2 gold medals… one for the 400m, and one for diving”.

One has to look back at the David Neville 400m from Beijing 2008 where he dove for a bronze medal.  There’s a good article on that buried in my Blog somewhere :)

DQs in the Relays

And finally, the DQs (disqualifications) from the relays.  Did I mention everything is under a microscope part?

Granted, the line judges are out there, and they are watching, so I’ll accepted the USA 4×100 men’s team passing the baton too early, or Canada stepping on the curve in London 2012. (it doesn’t mean I’m over it).

I do have a problem with 4×400 DQ’s for touching (or going over so slightly) the relay start of the acceleration zone that got GBR and India DQ’ed – enough to get Brazil in the Final.  I’m not saying it was a conspiracy, but that is such a harsh rule to get DQ’ed.