You are here: Home / Archives / 8 Lesser-known Tips to Sprint Faster

To read Adarian’s past articles on this Blog, click here

Do This, Don’t Do That, can’t you read the sign?

In Track & Field, we are told NOT to do a lot of things when it comes to sprinting.

The “non-biomechanically correct“ phrase is the end-all be-all phrase for why we are guided to NOT do a particular things a certain way.

We have no scientific data to determine which way is biomechanical correct and which one is not.

The next phrase we often hear is “waste of energy” to do something a certain way.

The major problem we have is no scientific data that determine what is the more energy efficient way of moving.

In the past years we have witnessed a new style of the Start that involves a toe being dragged and a lot of people came out against it even though the person doing it ran faster than what the scientists thought was humanly possible. 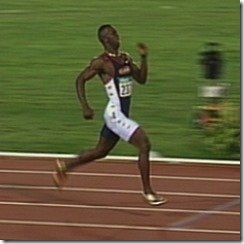 We had Michael Johnson (image-left) run faster than others with an unorthodox style of running.

Heck, look at the high jump when the Fosbury Flop was first performed. They laughed at him back then, and now that is the dominant style of high jumping.

I even recall some long jumpers performing a front flip as part of their long jump and that was soon banned as it was deemed hazardous way of jumping even though they were jumping well over 25 feet.

Just recently I watched a YouTube video where the sprinter knee was coming in towards the center of the body instead of straight ahead, the preferred visual method. Michael Johnson said the athlete was wasting a lot of energy and should drive the thigh forward, block with it and then drive it down.

You may ask yourself…well… How did we get here?

Carl Lewis has the “pretty style” of running that fit our visual appeal for how you should sprint. Calvin Smith, a former 100m world record holder at 9.93, also was the first athlete to run both sub 10 and sub 20 in the same day and is never mentioned as one of the top American sprinter. Perhaps his style was not visual appealing?

But visual appealing has never explained how we sprint at optimum speeds.

We have the theory of reducing ground contact time by .01 for so many strides (see Dr. Ralph Mann’s lectures from USATF NPEP 2007), but that theory never explains HOW to take off .01 per stride. (Click here for Ground Contact Time Debate (2009))

Then we have the segmental theories of “move either the arms or legs”, “step over drive down”, and of course the classic “lift your knees higher”.

Thus we can move on to the “spring mass model theory” of bouncing down the track. Apply more force to create a better bounce but now we are back to how to apply more force.

Finally, we also have the stride length formula of Cissik (2005) 1:

But this doesn’t explain when should the stride be at this length?

If you get something new or different and have success with it we quickly try and dismiss with the former mentioned phrases.

Here are a few things that go against the grain that you might want to take a serious look at and that explain how to do versus generic cues and vague instructions telling you what to do.

8 Things to Do to Sprint Faster 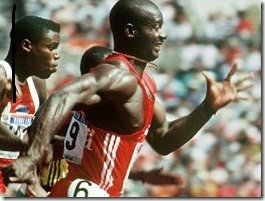 1. Hold your arm bent at 90 degrees that is something to do. The way to do it effectively is to place tension on the wrist. Cock the wrist as if you are drawing guns from a hip holster.

2. Make the wrist the focus of the movement, not the hand and not the elbow. This will allow the athlete to drive through the shoulder.

3. By holding tension at the wrist it also allows for the knee to rise up. This solves the knee lift issues. 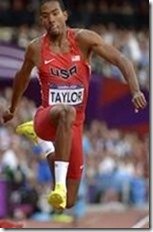 5. Adduction is better than hip flexion for bringing the knee forward. It also creates a continuous movement via internal rotation of the knee versus a stop and go movement by lifting the knee, driving the thigh and then driving it down. Adduction also allows for stronger and more complete contraction of hamstrings and glutes muscles. Last but not least adduction provides for greater range of movement at the hip joint during while allowing knee flexion to occur without stressing the hamstrings.

To bring the leg towards center of the body. Instead of straight linear up and down. Regardless of the leg position be it in front of the body or behind the body. Bring it back to the body via adduction which still will create flexion and extension at the hip and knee joint. The movement is contious in one direction which reduces braking action created by linear up and down movement.
The way to bring it down is the difference being stated.

7. Patience is allowing the legs to work completely. Move legs first and arms follow. This allows for a complete push cycle to take place.

And that is how you sprint and sprint fast.

Adarian Barr is the Assistant Track Coach, Jump/Hurdles/Multi-events at the University of North Carolina in Pembroke.  He is also Movement Specialist and Track & Field coach with Next Level Athletics and Fitness, as well as the inventor of PALO.