I want every 400 meter sprinter to go back in your diary and check how many 400 meter races you have run.  That included qualifying races, indoors and relays.

I don’t think I have raced more than forty or fifty 400’s in my lifetime.  (Some were more memorable than others, trust me!)

Count them. How many?

PUT THE WARRIOR GEAR ON 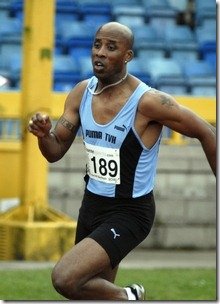 This article was written by Alastair Aitken from www.highgateharriers.org.uk

KERMITT BENTHAM has been a successful sprinter since the early 1980’s. In fact before that as a school boy at Forest Gate School he was good at all sports he turned his hand to.

This year in the Masters International at Ashford and at the British Masters Championship he was back in action running well again. On the 5th of July he won the British Masters M45 400m Championships at Alexander Stadium Birmingham in strong winds in 52.34  with Jonathan Tilt (53.06) and Andrew Waddington (53.50) second and third. 48 year old, Bentham, did that after lay-offs with plantar fasciitis, cysts on his toes and a dodgy ankle but he never lost his enthusiasm to compete.

"I seem to have outlived the guys as a sprinter who were racing with me as a young man but added ‘ The injuries I have had recently are not nice but I feel you have got to go out there and do it.. Put the warrior gear on and go and compete’

He said there was another reason, as he smiled with his gold edged front tooth gleaming in the sunlight ‘ It’s a lifestyle thing.You don’ t train just to compete but to maintain a healthy life style. You look after your body. I want to live to spend my pension.’

Kermitt Bentham was born in Barbados, West Indies on April 16th 1960. His mother was keen on him doing his studies when he was young but also pleased with him bringing trophies back to the house at an early age. He took an apprentice,ship in engineering and, he is now a Supervisor in a firm that manufactures storage systems for schools and hospitals and he supervises packaging and other things as well.

Bentham belonged to Newham AC to begin with that was amalgamated later with Essex Beagles. As a junior he won Essex Championships and remembers also as a senior having a great rivalry with Terry Whitehead (1980 AAA’s Champion).

Kermitt Bentham joined TVH in 1980 and met his coach Ron Rodden. At the time Rodden had Les and Trevor Hoyte in his training group. Bentham gained 13 international vests and eventually ran his fastest ever 400m of 46.57 in the Southern Championships on the 27th of June 1987. In his first international he was in the British team that beat the Commonwealth Indoor 4x400m record at Cosford with a time of 3.07.4 (Team John Regis, Paul Sanders, Paul Harmsworth, Kermitt Bentham). ‘ When I was around in those days said Bentham ‘There were two groups of 400m runners in the UK. One group who ran 44-46seconds and another massive group who ran 46-49. That second group were all fighting to get into the top group, many of whom ran in the Big Games. Consequently you had to have an ‘A’ & ‘B’ Final in the Southern and the AAA’s. I ran 47.1 in a AAA’s Championship an did not progress to the next round where as now, with a time like that, you make the Final.

When Kermitt Bentham entered veteran competition, as a 40 year old, he broke the British M40 400m record with a time of 49.5. The record has previously been set 26 years before! He looks forward to attacking records again as a 50 year old.

Bentham trains at West London Stadium near Wormwood Scrubs. That stadium is now called the Linford Christie Stadium. As Kermitt he knows the guys down the track he obviously has strong feelings about Lindord Christie as a person and his coach Ron Rodden

"Linford gets a lot of bad press. He does a lot on the periphery for athletics. Even now you get the young guys down the track and they say to each other  Linford did this! Linford did that! It’s LInford every other word.’

Regarding Ron Rodden ‘ He is very inspirational., He comes down the track and he is 77 years old. We look at it, when we go down to the track that he is our Dad,. Our Father figure. We all love him.’

Kermit Bentham concludes ‘ I go out there and compete, what else would I do. I love the sport"