Injury Prevention and Rehabilitation – Part One

You are here: Home / Coaching / Injury Prevention and Rehabilitation – Part One
51
SHARES
FacebookTwitter

This extensive Athletic Injury review was written by Stevie Gee, a personal trainer, fitness coach and a GB Master Athlete at 400m.

Click here to read all of Stevie Gee’s past articles.

Injury Prevention and Rehabilitation – Part One

Sports injury is an inevitable possibility – the arch-nemesis of optimal sports performance and an inhibitor of longevity in one’s chosen event. Injury is no respecter of age, gender, ability, experience or performance level and, depending on the severity, it can sideline an athlete, for days, weeks, months or even years.

In the worst-case scenario, sustaining an injury, or a series of recurring injuries, can permanently frustrate one’s athletic goals and aspirations. Injury doesn’t just effect the body, it also effects the mind – and we will be focusing on sports psychology and injury in future articles.

The ultimate objective of this series of articles is to help keep you motivated when the inevitable happens, and create a forum for discussion and support through these articles.

When it comes to Track and Field Athletics, whether at amateur or elite level, sustaining an injury, either during training preparation, or in competition, no-one is immune to  injury at some stage in their athletic development.

Take for example, the Great Jamaican Sprinter, Usain Bolt. Despite employing the latest and most advanced training methods, receiving expert coaching, having the best sports therapists, nutritionists, physios at hand, having the most appropriate footwear and equipment, as well being able to train in the best facilities and climates, still (at time of writing) we see the fastest man in the world sidelined with an unspecified foot injury which has  curtailed his season and further threatens to halt his appearance at the forthcoming 2014 Commonwealth Games in Glasgow, and future appearances at meets throughout the remainder of this year.

Bolt’s athletic performances truly epitomise and reflect the Olympic Motto: Citius, Altius, Fortius (Faster, Higher, Stronger). As athletes consistently strive to improve upon their performances and results in day-to-day training as well as in competition, the risks to sustaining an injury increase substantially, no matter how well one is prepared.

Whether in the individual Running Events, Jumping Events, Throwing Events or in the combined Events, striving for excellence places the body under tremendous torsional stress as training volumes and intensities rise. The key to sports injury prevention is to identify the risks and set in place training parameters and modalities to help minimise them.

Whether you are a student or coach, a casual weekend warrior, seasoned athlete or someone aiming to take up an Athletics Track and Field event, at Junior, Senior, or Masters level, this first in a series of articles dealing with Injury Prevention and Rehabilitation has been designed to help you. We will begin by looking at the most prevalent injuries, firstly in running and reviewing blogs relating to those injuries – looking at ways of identifying, preventing and treating those injuries and the latest devices and methods used to safeguard against them, keeping you on track to attaining your  goals.

Sporting Injuries are sustained from varying degrees of trauma placed upon the body during training and competition. These injuries are divided into two distinctive categories:

Type and location of running injuries

The sheer magnitude and complexity of the subject matter means we must divide our studies into several succeeding articles. For those wishing to delve deeper into the subject matter, links will be provided for further study such as www.sportsinjuryclinic.net where you can download an app onto your phone as well as locate sports injury clinics near you.

In this  article, we will be focusing primarily on overuse injuries, citing the most common injury sites throughout the kinematic chain, from the foot upwards to the ankle and knee. Then to the hip, pelvis and upper extremities, in subsequent articles.

An overuse injury to the musculoskeletal system results from the combined fatigue effect over a period of time beyond the capabilities of the stressed structure (Stanish 1984; Elliot 1990).

Although it has been established that repeated stresses on the varying structures of the musculoskeletal system may result in an overuse injury, this does not imply that stresses to the musculoskeletal system should be minimised to avoid injury. All biological structures, such as muscles, tendons, ligaments and bones, adapt both positively and negatively to the level of stress placed on them. Positive adaptation occurs when the applied stresses are repeated below the mechanical limits of a structure and adequate time periods are provided between stress applications (Kannus et al. 1994; Bailon-Plaza and van der Meulen 2003).Conversely, negative adaptation (injury) occurs when a stress is aplied beyond the mechanical limits either one time, as in the case of acute injury or repeated times with an insufficient time period between stress applications, as with overuse injuries (Stanish 1984; Elliot 1990; Rolf 1995).

Etiology of Overuse Injuries in Runners

An overuse injury (micro trauma) can be defined as a musculoskeletal ailment attributed to running that subsequently causes a restriction of both running speed, distance, duration, or frequency for at least one week (Koplan et al. 1982: Macera et al. 1989; Hreljac et al. 2000)

For a runner who has sustained an injury, there are several options for treatment. This can include seeking a Gait Analysis, where the practitioner performs an examination of the athletes walking and running mechanics, anatomical alignment, muscular strength and muscular flexibility to determine the interrelationship and cause of the injury and thus establish methods to prevent a recurrence through prescribing rehabilitative protocols, including  advice and recommendation from a reputable running footwear store which footwear best suits the athlete, in accordance to supination, pronation and neutral foot plantation.

Of those rehabilitative variables, we will be listing several conventional methods within this article via blog links, to more advanced variables in succeeding articles, for your consideration ( from Sports Massage, Sports taping to, Hydrotherapy, Electrotherapy and complimentary Therapies)

Overuse injuries are, more often than not, caused by repetitive overloading, which results in microscopic injuries to the musculoskeletal system. Although the body’s tissues can withstand great loads placed upon them, nonetheless, there is a critical limit to its capacity (injury threshold), according to frequency of load, which differs between one person to the next. The body may be more susceptible to injury due to factors such as misalignment of the leg, muscle imbalance, as well as factors such as poor fitness, high BMI, poor strength in relation to body’s ability to deal with Ground Reaction Forces during running, improper training methods, poor technique, faulty or incorrect equipment, varying surfaces and conditions.

Despite advances in research, running shoe technology, and training methods over the last 30 – 40 years, running injuries have not decreased and in some instances have rather increased in relation to IT Band Syndrome and Stress Fractures.

The actual injury overuse frequency is difficult to determine exactly, however it is estimated that almost 50% of athletes that attend a sports injury clinic have incurred an overuse injury. The age of occurrence of overuse injuries also varies being most common in top level athletes aged between 20-29, but are also seen in non-competitive athletes aged between 30-49 years. Further research is needed to ascertain figures for master level athletes.

A total of 80% of overuse injuries are reported to occur in endurance sports such as long distance running, with 80% occurring in the lower extremities of the body, most frequently at the knee representing 40% + of all running related and at the ankle, foot and heel 21%. For most overuse injuries, the underlying problem is an inflammatory response. Overuse injuries in tendons are often secondary to degeneration.

See also  What Can We Learn from Secrets of Soviet Weightlifting?

The ageing process is inextricably linked to degenerative injuries to bones, tendons, ligaments and muscles so even more precautionary measures must be incorporated into the athletes training structure, particularly when it comes to MASTERS athletics. 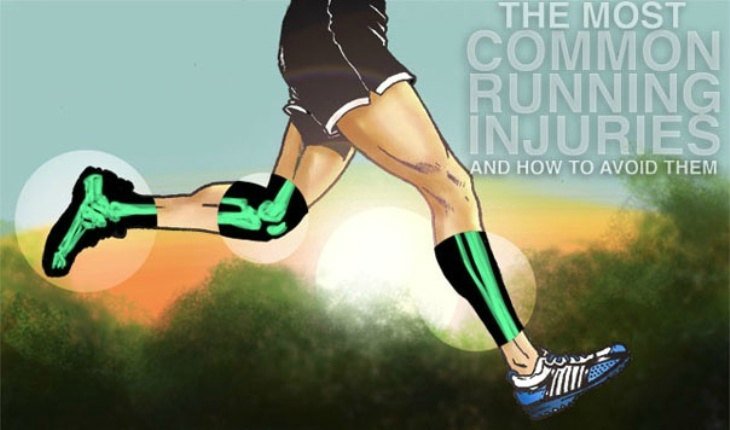 With regards to running, the knee has been located as being the most injury-prone site, representing more than 40% of all running related injuries. PFPS accounting for between 46% to 62% of these injuries (Clement + Taunton 1981; Pinshaw et al 1984; Taunton et al. 2002).

Foot problems are the most prevalent injuries that are reported by long distance runners, stemming from the tremendous biomechanical stress placed on the foot during running, however they also effect middle distance runners, sprinters, jumpers and throwers to a lesser degree.

The foot is comprised of bones, tendons and ligaments with minimal muscle mass, which has to withstand great ground reaction forces during running that are equivalent to three to four times normal body weight in middle distance to long distance runners. In Sprinting, those forces are higher still – five times and beyond.

LINKS and other notes

So we start with the Foot…

Then moving up heel…

And finally the Knee…

Knee Injuries with Various muscles cross the knee joint and to provide both dynamic control and stabilisation.

Next article will focus on Coping with Injury… The Psychology of a Winning Mind, featuring Profile of Men’s M35 2014 Indoor 400m Champion, GB Masters Athlete Rick Beardsell… Staying Positive whilst battling through an Achilles Injury… and ow he did.

Stevie Gee is a personal trainer, fitness coach and a GB Master Athlete at 400m. He competed for Northern Ireland in the early 1990s, and aims to run at the European Vets Athletic Championships, next year’s world masters championships in Lyon M45 over 400m