There comes a time when an ageing or no longer dominant 400m sprinter decides to move up to the 800m.

Usually it’s the coach who decides this.  I’m not sure of Jeremy Wariner’s case.

Why would you want to move up?  For me, anything over 400 meters I take a taxi.

But seriously, there are several factors.  The number one reason is they aren’t getting any faster in the 400m.  They have stagnated in progression.  Most of these coaches train their 400m long to short.  And you wonder why their speed or acceleration development hasn’t progressed?

But by using a short to long approach, these same coaches assumes it’s easier to train for speed endurance (and special endurance), and thus the decision to move up to the 800 meters.

Considerations before Moving Up

There are hundreds of reasons or considerations on why you may consider moving up to the 800 meters.  Here are only a handful:

You have to break the ice sometime.  But when you see a 400m sprinter with 43+ speed going through 400m in 55 secs, that is jogging with all that speed reserve! 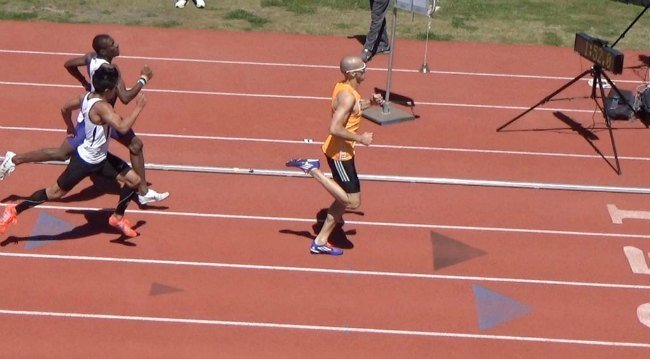 So, based on his raw 400m speed, and if the training is in place, what should (could?) he run?

Bring out the Calculators

I remember watching Adam Steele, the 400 meter 2003 NCAA Outdoor champion from the University of Minnesota, move up to the 800m and never materialized.

So you know what you can do with that calculator, right?

Speed is the Key

Once upon a time, Kenya was a contender in the 4×400 meter relay.  They won a Silver at the 1968 Mexico City Olympics, and then a Gold in the 1972 Munich Olympics. Julius Sang also won a bronze in open 400.  Where are the sprinters now? (I’ll save that for another post)

I took a random sample of a few well known athletes (my favorites… if you have some to add, please comment below) 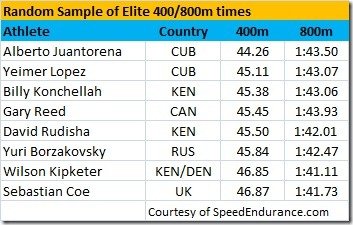 So what can Jeremy Wariner potentially run?