The Greatest Marathons Around the World [INFOGRAPHIC]

You are here: Home / Track & Field / Marathons / The Greatest Marathons Around the World [INFOGRAPHIC]
13
SHARES
FacebookTwitter

The popularity of the Marathon isn’t going away.

Ever since the Greek soldier Pheidippides allegedly ran from the Battle of Marathon to Athens, we have celebrated the 26 mile 385 yard distance.

It wasn’t always 26.2 miles or 42.195 km.  In 1908, Queen Victoria wanted the marathon to start from Windsor Castle to the entrance to the White City Stadium, plus one lap :)

People think the running boom is has burst, but in fact, it’s still rising. This chart below gives an illustration of the rise in popularity of the marathon.  The blip is from the cancelled 2012 NYC Marathon from Hurricane Sandy.  What this means is more people running marathons, which makes the most desirable marathons harder and harder to get in. 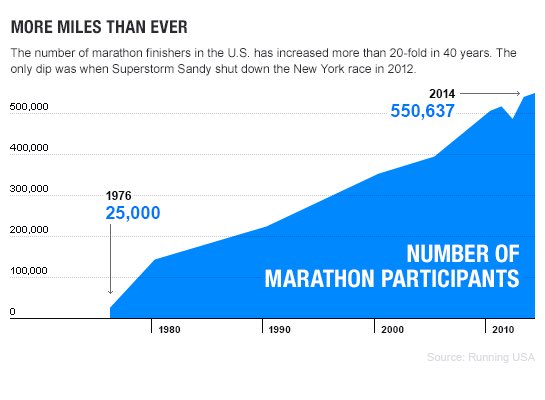 So, what are the Greatest Marathons Around the World?

Of course, Boston has to be on that list, being one of the first marathons.   The qualifying times are getting tougher and tougher.

But what about the others?  With or without sponsorship?

The list below only shows 5 of the greatest marathons.  Of course there are much more, but if you are going to dream, dream big.

I’m still not a fan of a spring marathon, because if you do winter base training, the marathon can be an unusually freaky hot day, you’ll be in for a world of hurt.