You are here: Home / Witty / Commentary / 2010 Chinese New Year – The Year of the Tiger
0
SHARES
FacebookTwitter

Anyone remember the Survivor song, Eye of the Tiger?   Who doesn’t know it?

On my recent trip to Amsterdam, I was introduced to a Belgium a capella group called Voice Male. (Thanks, Wim) You can see and hear their version of Eye of the Tiger on YouTube.

Every 12 years, this has to be the most popular song made famous by the Rocky movie.

3 common myths of the Chinese New Year was leave food at the door for the beast Nian (or Nien).   Wearing red or hanging red scrolls scares away the beast as well as the use of firecrackers.

Below is a chart of the years and animals.   Note that the beginning of each zodiac year should correspond to the first day of the lunar year.  If you are born in January or early February, you’ll have to check to make sure which year you fall under.  For example, Feb 1, 2010 is still the Year of the Ox.

Mythology also states every 12 years (the year you were born) is your “lucky year”.

Is this your lucky year? 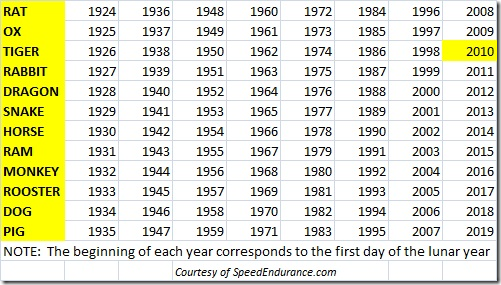