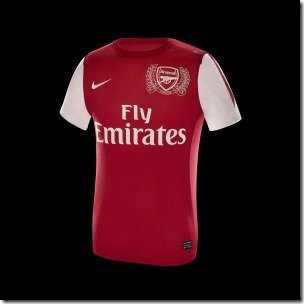 (A lot of SpeedEndurance.com readers are Arsenal FC fans, so I am posting this on their behalf.  Enjoy!)

The Arsenal home shirt for the 2011-12 season features a new bespoke crest that marks the club’s 125th anniversary year – and looks forward to the club’s next chapter as the most environmentally-friendly kit Nike has ever produced.

Founded in Woolwich in 1886 and called The Royal Arsenal, the celebratory crest design combines the graphic of the first club crest with the current version in a bold white print and carries the anniversary dates of 1886 and 2011 on the heart of the shirt.

Underneath the celebratory crest sits the word ‘FORWARD’ as a tribute to the club’s first motto.

While the history and tradition of the club is present in the shirt design, the new home kit is made from Nike’s ground-breaking recycled polyester – which for the first time includes both the shirt and shorts.

The classic design is inspired by the 1970’s strips and boasts a clean, refined look with a block red body and white sleeves with red speed stripe detail. The shorts are white with a red speed stripe and the white socks carry the club’s founding year 1886 on the back of the fabric.

On the back of the shirt below the neck reads ‘’Arsenal’, while inside the front, on the back of the crest, is a graphic that reads ‘Victoria Concordia Crescit’, (‘Victory Through Harmony’), Arsenal’s Latin motto, which was previously featured on earlier versions of their club crest between 1949 and 2002.

The light weight kits (13% lighter than previous versions) actively regulate the players’ body temperatures on the pitch to keep them dry and cool at all times through use of Nike Dri-FIT technology. This technology draws sweat away from the player’s body through the material where it can evaporate.

Temperature regulation is helped by ventilation zones, consisting of hundreds of tiny laser cut holes from the under arms to the waistband, allowing air to circulate to keep players dry, cool and comfortable.
For the first time the club crest on the front of the shirt is heat transferred, making it even lighter and crucially allowing this area to now be ventilated as well.

The shirt has a new aerodynamic fit this season, now slimmer and more athletic, providing 17% more stretch than the Arsenal shirt of two years ago. While a bonded hem offers a streamlined look that reduces irritation caused by chafing.

To compliment the new match day kit Nike has launched a unique Arsenal line of training and lifestyle clothing for both players and fans to wear on and off the pitch.

The kit and extended line is available for pre-order from May 2 and will be available in stores from June 9. For more information visit nikefootball.com and nikemedia.com for shirt and player images. 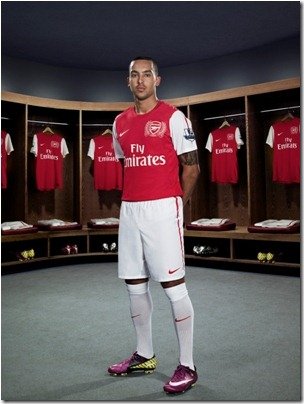 Formed in 1886 by workers at the Woolwich Arsenal Armaments Factory in Woolwich, south London, the club was originally known as Dial Square and then Royal Arsenal.

In 1913 the club moved to north London and became the dominant force in English football during the 1930s winning five League Championships and two FA Cups.

In the 1970/71 season Bertie Mee led Arsenal to the League and FA Cup double, only the second time in the twentieth century an English club had won both trophies in the same season.

A member of the double-winning side, George Graham returned as manager and would create another great Arsenal side.

On arrival at Highbury in 1996 Arsene Wenger was an unknown figure in English football, but over the following fourteen seasons the Frenchman has established himself as one of European football’s greatest
ever managers.

In Wenger’s first full campaign he guided Arsenal to the League and FA Cup double in 1998, and then repeated the feat in 2002. The FA Cup was successfully defended in 2003.

In the 2003/04 season Wenger’s ‘Invincibles’ became the first English club for over 100 years to win the League title without losing a single game. Another FA Cup was added a year later.

Since 2006 Arsenal have played at the new Emirates stadium where Wenger has created a new and exciting young team, led by captain Cesc Fabregas and the emerging talent of Jack Wilshere.