This interview was taken on June 9, 2011, two days after his 9.96 100 meter National Record at the Montreuil meeting.

Q: Christophe, how was your evening after your second place in the 100m at the Montreuil meeting, behind Jamaican Yohan Blake, which culminated in a new French record?

Christophe Lemaître: It was quiet. I went back to the hotel, I had dinner and then I went to bed. And I slept very well!

Q: With the hindsight of these past few hours, how do you rate your race record?

CL:  I have to admit that I’m surprised by my time. I wasn’t expecting to have run so fast, especially given the weather conditions (it was 14° C in Montreuil when the 100m was run). My race was only average. I felt a lot better in Rome, last month (3rd in a time of 10’’00). It goes to show that I’ve made progress this year in nearly all the different sectors. Last year, Yohan Blake was way ahead of me at the Meeting Areva (9.95 compared with 10’’09). Right now I’m just 1/100th behind him. 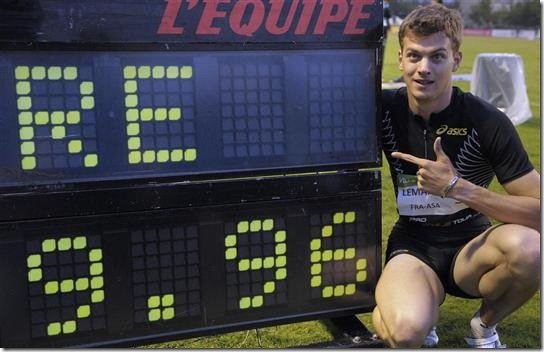 Q: Can you explain to us where you think you have made progress?

CL:  Pretty much everywhere. My start is better. My technique is more fluid. I’ve gained power as I weigh two kilos more than I did last season (81/82kg instead of 79kg in 2010). Added to that I’ve improved my race finish, even though I’m still lacking consistency in this section of the 100m. I still find myself lengthening my stride, though my coach, Pierre Carraz, is pushing me to up the frequency of my strides instead.

Q: Could the progress you’ve made enable you to set your sights on a medal at the Daegu Worlds?

CL:  It’s hard to say. Nobody knows how far I can go. If I continue to progress at the same rate, I think I’ll soon be capable of scoring a European record in the 100m (9.86 by Linford Christie). Right now, I know that anything can happen in a world final. I could just as easily shatter my record and win a medal as I could mess it up and finish 7th or 8th. One thing for sure is that I’ll have to go very fast this year to reach the final. The times are already very low in the 100m. Subconsciously this competition doubtless pushed me a bit into going so fast so early in the season.

Q: What have you got planned for the rest of your season?

CL:  I have to run in Stockholm, where I may well double up and do the 100 and 200m, in Lausanne, in Paris on 8 July against Usain Bolt in the 200 m, at the French championships and finally in Monaco. August will then be devoted to training, in Aix-les-Bains, southern France, before I head off to Daegu.

Q: Are you going to run both distances in Daegu?

CL:  In principle, yes. The decision isn’t quite definitive yet, but I’m prepared to do it.