His website is www.thinkingfeet.com and you can reach him at horizontalvelocity (at) hotmail.com

This is a new series on “When Athletes become Coaches”.

Training is usually defined as a systematic process of repetitive, progressive exercise, which also involve learning processes and has the ultimate goal of improving the athlete’s systems and functions in order to optimize athletic performance. A training plan must follow the concept of periodization, well planned and structured, and be sport specific, so as to cause the athletes energy systems to adapt to the particular requirements of the sport.

In order to achieve such goals, power is essential. Explosive, reactive power is the ability to apply force at a rapid rate in order to accelerate the body or projectile at a high momentum (Power = force x Velocity). An athlete can be very strong and still not be very powerful. This is simply due to low rate of utilization, i.e. the ability to contract already strong muscles in a very short period of time.

The most important factors in determining jumping and sprinting performances is the ability to quickly apply forces to the ground. Previous research has shown that faster runners can apply greater amounts of force down into the ground during the brief ground contact period than slower runners. This high rate of vertical force application leads to shorter ground contact times as well as longer stride lengths, thus allowing the faster runners to attain greater maximum speeds

What many fail to realize is that gains in strength can only be transformed into power by applying very specific power training methods. For decades it has been probable that one of the most successful methods of training is the employment of plyometric exercises.

Also known as reactive training, the stretch – shortening cycle, or stretch reflex. The exercises known popularly as plyometric are those in which the muscle is loaded in an eccentric (lengthening) contraction, immediately followed by a concentric (shortening) contraction. It has been demonstrated that a muscle that is stretched or pre-tensed before a contraction will contract more forcefully and rapidly. What many fail to realize is a third type of force known as isometric which occurs just before touchdown of the foot before the eccentric contraction, and again at full support just before the concentric contraction. See figures below. 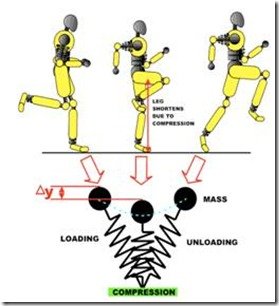 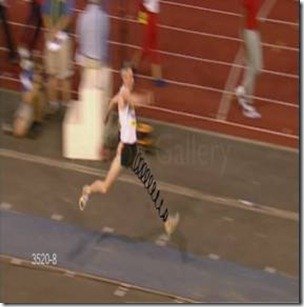 an isometrics contraction of a muscle generates force without changing length. An example of an isometric contraction would be carrying a weight in front of you. The weight of the object would be pulling downward, but your arms and hands would be opposing the motion with equal force going upwards. Since your arms are neither going upwards or downwards your bicep would be isometrically contracting. The force of an isometric contraction is wholly dependent on the length of the muscle while contracting. When looking at the bounding sequence of an alternating right to left contact one has to understand the sequence as (isometric – eccentric – isometric – concentric).

What is CNS training (central nervous system training)? The fatigue induced by high intensity depth and depth reactive jumps knows as plyometric and bounding exercises are two fold: local and fatigue affecting the CNS. Local fatigue is a result of depleting energy stored in the muscle, the fuel necessary to perform such explosive movements (CP- creatine phosphate and ATP), and the production of lactic acid for repetitions longer than 10 – 15 seconds.

During training athletes are fatiguing the CNS, the very system which is determinant in sending powerful signals to the working muscle to perform a given amount of quality work. This is why power and strength training with loads of 70% of maximum has been called “nervous system training”, a way of acknowledging the importance of the CNS in high quality training.

Plyometric training is performed as a result of nerve impulses sent by the CNS to the working muscles. These impulses have a certain SPEED, POWER, AND FREQUENCY. Any high quality training requires that the speed of contraction, its power, or frequency, be at the highest level possible.

A training plan has to be simple, objective, and above all flexible. Its contents may have to be modified to match the athletes’ rate of progression as well as adaptation to the physiological challenges and improvements in performance. A coach is only as efficient as he/she is organized. A Central Nervous system/plyometric program is successful only if it is well designed, based on scientific knowledge available in the field, and if it considers the periodization of strength and power training throughout the year.

Multiple sets and high repetition with an emphasis on creating muscle endurance, while enhancing muscle tone, and creating suppleness in the connective tissues. In duration of 4 – 6 weeks

Refers to the highest force that can be performed by the neuromuscular system during the maximum voluntary contraction. Demonstrated by the highest load that an athlete can lift for multiple reps. Strength and speed combine to perform maximum force in the shortest period of time. In duration of 1 – 3 months

Development of neuromuscular coordination through isolated integration, specific to the strength as concerned to the prime movers of the selected sport. The properties of this phase are highlighted by various implement throws, low intensity depth reactive jumps and hops. The use of weighted belts and vest are often implemented as well. Duration of this work should go throughout the competitive phase of the year.

It has been noticed in elite jumpers where than can become a negative relationship between the development of maximum strength and special strength. Through trial and error I have developed a methodical approach of alternating maximum strength work with special strength work. During this portion of the preparation I recommend that maximum strength work be limited to 8 weeks. After a period of 8 weeks undesired ultra-structural changes in the muscles can be seen, such as hypertrophy of type I fibers that will hamper elite performance. Before such changes happen, other training methods able to develop type II fibers (mainly IIB) should replace maximum strength loads. High velocity eccentric strength work shows an effect that is exactly the opposite of the explained above. Type IIB fibers are recruited first in this case because they need less time to relax after the action. (i.e. jumps from a fall)

See also  Are You Pushing Your Kid too Far?

Most programs randomly employ the implementation of bounding randomly into the athletic training year with little to no thought of the adaption and progression of the organism. Anecdotal prescriptions of bounding and plyometric work can often do more harm than good. Central nervous system (CNS) power based training with the aim of improving eccentric strength, and force velocity curve without the proper power based platform can lead to severe injury and time away from the main competitive season. In most cases, plyometric exercises are planned on the same days as other activities such as technical and/or tactical work are performed. For instance, following aerobic training the overcompensation is reached in approximately 6-8 hours. The same dynamics are not true for speed and power, the recovery or overcompensation from high intensity CNS activities is a minimum of 24 hours. In other term, the CNS suffers the most fatigue and the nervous cells recover seven times more slowly than the skeletal muscle cells. From my personal experience as a coach and elite athlete I have seen the overcompensation phase take upwards of 72 hours in elite jumpers and 48 hours in elite sprinters.

When looking at the annual planning of technical/tactical, strength, and plyometric training the preparation should uniformly progress and develop cohesively. Taking a loser look i.e.

The optimal height for depth reactive jumps for speed training is between 30 inches and 43inches in order to make gains in dynamic strength (power).

“When adaptation of strength has reached a plateau which cannot be surpassed through maximum strength, as related to rate of force development, some new element of greater stimulation usually has to be applied”. Through science we have identified that elite sprinters and jumpers are able to apply greater vertical force to the ground. These forces not only give them an improvement in stride length, and phase length. They also improve ground reaction time and stride frequency. Ground contact is very short ranging from 0.080 – 0.105 seconds, being able to make improvement in vertical force at such a high velocity until now posed many unanswered questions. This type of training would require velocities higher than those at competition speed. Eccentric strength in regards to shock tension demands would be greater than traditional bounding and depth jumps, Likewise, the ability to improve the concentric shortening time of the explosive push off and heel recovery would be very high.

To facilitate this new motor programming I have found the use of external pull support in bounding and depth reactive jumps yield extreme benefits in speed and power. Sprinting involves a series of jumps from one foot to the other; increasing the power at push off and jumping further without touching the lead foot down ahead of the hips lengthen stride. Elastic power is the main muscle at foot strike, activating “stretch receptors” which result additional muscle fibers resulting in more force. Decreasing external load when performing jumps and hops is a great stimulus at developing velocity and explosive strength. Motor patters can be produced when introduced to this type of systematic training. These patters of CNS recruitment can also be reproduced when the facilitation of the external pull support has been removed. This is a method that provokes central nervous system learning. Includes examples would be:

The decrease in ground contact time along with external pull support facilitates greater contraction in the concentric phase. This means an improvement in ballistic, explosive power. A simple way to test and monitor the progression of this explosive strength training would be to perform a fly 30meter sprint test where a 30meter acceleration zone is used. A speed-bounding test to develop a power score would also be used as well. Using a 15-20m acceleration perform a 30m alternate right-left speed bound. Count the number of contact as well as time the effort of the 30m bound. Take the number of contacts (x) time of execution to get your score. For example 9 contacts (x) 3.5 seconds = 31.5 After12 – 15 sessions of the prescribed drills repeat the 30m fly sprint and the bounding test. One should highly marked improvements in both areas.

I recommend that maximal rest be taken between repetition of performance during workout as well as adequate overcompensation between sessions. This type of CNS training can best be described as super-maximum training and adequate attention has to be placed on the duration and succession of workouts. In most cases less is more, quality of training and maximum effort placed on each repetition or jump far outweigh countless repetitions.