Registrations are currently being accepted for the Hunger Run event in Rome on Sunday 21 October, which has as its theme "Let’s Stop Hunger in its Tracks."

The United Nation’s three Rome-based agencies The Food and Agriculture Organization (FAO), the World Food Program (WFP) and the International Fund for Agricultural Development (IFAD) have united with the city of Rome on the occasion of World Food Day to raise funds for projects in some of the world’s countries most affected by hunger.

The event, formerly known as Run for Food, comprises a 10 km race and a non-competitive 5 km run or walk around streets in the historic center, which will be closed to traffic. Runners are asked to begin assembling on Viale delle Terme di Caracalla from 8:30AM and the race starts at 10:00AM from the Caracalla stadium.

This year, the registration fee of €10 per participant will go towards helping communities in the Horn of Africa suffering from the effects of drought and poor harvests. Advance registration is recommended. Among the thousands who participated last year were a number of high-profile diplomats and FAO goodwill ambassadors including renowned Olympic gold medalist athlete Carl Lewis.

Organizers say the run has three objectives: to increase awareness of the fact that hundreds of millions of people around the world live in hunger; to raise funds to help hunger-affected communities in developing countries to lead more food-secure lives; and to build links between the people of Rome and the UN food agencies headquartered here.

For more details on the routes and registration process see www.hungerrun.it. 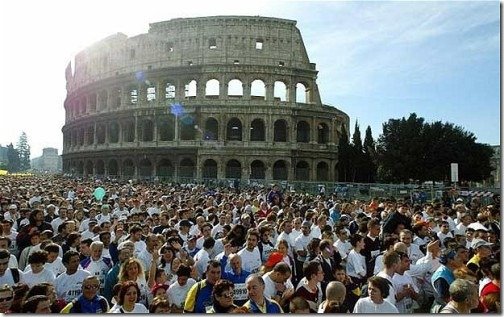