Before I give you the info for Eddie Hart’s free ebook on the Falling Sprint Start, I need to give a brief history lesson.

At the US Olympic Trials in 1972, both Hart and Rey Robinson repeated the world record, running the 100 m in 9.9 seconds, and were favored to win the race at the Olympic Games with Valery Borzov being the biggest threat.

But we all know the tragedy of the “missed quarter finals from the revised schedule” story.

No matter… Eddie Hart put aside the misfortune, and ran the anchor leg for the USA 4 x 100 m relay team, which won a gold medal and equaled the United States’ own world record of 38.19 along with Larry Black, Robert Traylor, Gerald Tinker. 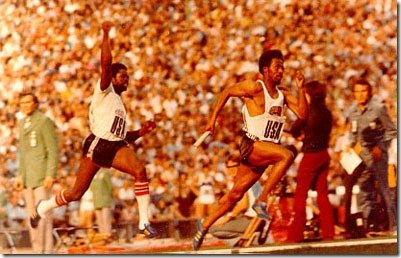 Here is a video of that relay race:

There is no catch or gimmick.

Just send an email to eddiehart@eddiehartaiof.org and ask for the free ebook on the Falling Sprint Start.