This week is a big week at the Apple app store.

I wrote about the the iPhone sprintTimer – Photo Finish & Race Timing back in 2011.

If you are familiar with the iPhone sprintTimer, you’ll love the new features. (upgrades are free if you already own it)

There is a new menu choice called “Start Sender” in the sprintTimer.  So with 2 iOS devices, you can use one device to start the run or race, and the other device to take accurate photo finish times.

If you are lucky to have several iOS devices (iPhone, iPod touch, etc), then you can even do intermediate splits!

More info on the iPhone sprintTimer can be found here: 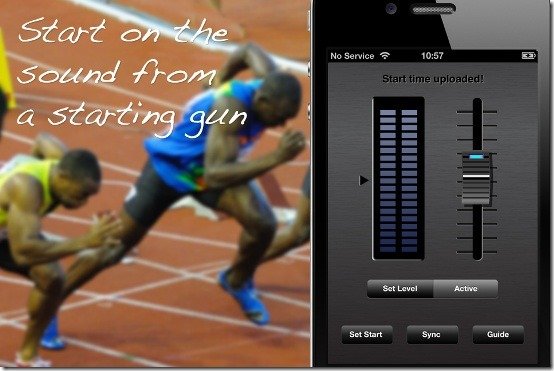 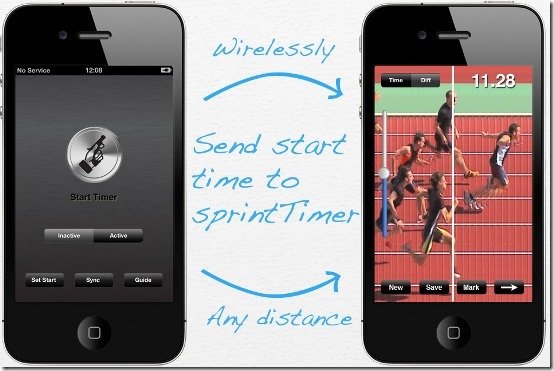 This review was written by Stewart Marshall, a UKA licensed Sprint Coach, Coaching at Coventry Godiva Harriers (and is a confirmed techoholic!)

Last year I became aware of an iPhone app sprint timer and straight away I had to play with it with my sprints group. Using the apps ability to have photo finish and capture the picture was a brilliant tool in motivating the young and old athletes each trying to be better than the rest!

There lay every coaches and even athletics clubs initial problems! TIMING!

As a sprints coach, I’m more than aware that as soon as my athletes cross the line the first thing they want to know…… “how fast was that”?! Immediately they begin trying to calculate what this means when they eventually come to race etc.

We have all listened to and even participated in arguments about the accuracy of hand timing, is it 0.24… 0.50… 1.0 second! Truth is we just don’t know as it changes with every click.

Well, I have been lucky enough since finding the above app to have been in communications with the developer ever since and recently beta tested a development to this app that allows you to capture the most efficient timing to date without spending the thousands of pounds required for timing gates.

The development allows you to link two apple devices (with internet access) one that will start your athletes (with the “On your marks… Set… GO!” on a gunshot we are used too) and a second to video your finish like a real race!

This works by your devices syncing and confirming the exact time of each, the first device starts the rep/race and uploads the exact “Real Time” which is then downloaded by the second device running the photo finish, after a very fast calculation…… Voila! Your time!! Nicely calculated within a few hundredths. Not bad for an app that costs under 2 bucks… I think you will agree.

This is a superb development for athletes and coaches not wanting to spend the hundreds or thousands of dollars or pounds but wanting as near competition level timing as possible.

With a little further development, and play around I am sure this App will go from strength to strength. During Beta testing I was even able to hook a third device up which allowed me to start the athlete get a time at 30m and again at 60m which allowed me to of course then get his fly time.

Without a doubt the best App available on the market for sprinters and coaches who want accurate timing to see their development.

The change to the current app is available today.