Hamstrung by the Hamstring – Treatment and Prevention, Part 1

You are here: Home / Coaching / Hamstrung by the Hamstring – Treatment and Prevention, Part 1
22
SHARES
FacebookTwitter

This guest post was written by Dr. Allan Tissenbaum.

He is an Orthopaedic Surgeon based in Pittsburgh, PA, specializing in both Surgery and Sports Medicine.

JIMSON’S PREAMBLE: Allan and I go way back to our McGill University roots and ironically, for 8 years covering 1981-1988, we were never teammates.  It wasn’t until the 1992-93 season where we both returned to our 5th year of eligibility and ran together on the 4x200m relay at the Canadian University Nationals (then the CIAU) in the Skydome, Toronto.  All through the years, we were coached by Dennis Barrett starting the 1984-85 season, who is currently at McGill for the 29th season.

Allan and I are a few years apart, so we do collide in the same age group every few years. Unlike other Masters Athletes, we don’t duck each other!

Hamstrung by my Hamstring

At the USATF Masters Championship (July 2013) in the 100m final, I was feeling good in Lane 4, accelerating away from the field at 40 meters until… click on the video below to see what happened.

Unfortunately over the course of my running and professional career I have been on both sides of hamstring injuries. I hope to give some input as to the anatomy physiology, treatment and prevention to this potentially career ending injury. 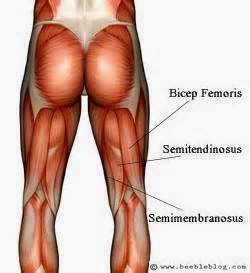 The hamstring muscle is not one muscle as it is commonly referred to by most individuals. There are three main muscles: the Biceps Femoris(BF), Semitendinosis(ST), and the Semimembranosis(SM). All three of the tendons originate from the ischial tuberosity, which is the bone at the base of your butt. The Biceps Femoris ends on the lateral or outside on the fibula, the other two end on the medial side on the tibia. The primary action of these muscles is to bend the knee, secondary action is to extend the hip.

The Biceps Femoris is the most commonly injured followed by the Semitendinosis. There are many theories and explanations for injury, but no single theory can explain all injuries. Risk factors that are associated with injuries are: Strength imbalance, insufficient warm-up, and fatigue.

There exists studies in basic science which show associations between muscle length and strain, flexibility and best muscle length, flexibility and warm-up. The most common cause is excessive strain during a negative contraction and the severity has to do with the speed of the contraction. This is most likely to occur in the late swing phase of sprinting when the knee is extended and the hip flexed.

What is apparent after reviewing the literature is although we think we understand the injury, we are really unsure as what to do for prevention or the best rehabilitation protocols.

Fortunately most injuries are grade 1 or 2, and will usually heal with time and rehabilitation with time. The more severe grade 3 may require surgery depending on the area of the tear and after healing may be left with some functional impairment.