It was 60 Years Ago Today, Roger Bannister Taught the World to Play

You are here: Home / Track & Field / 800m-Mile / It was 60 Years Ago Today, Roger Bannister Taught the World to Play
16
SHARES
FacebookTwitter

I never get tired of this story.

Roger Bannister wanted to quit Athletics after the 1952 Helsinki Olympics where he came 4th in the 1500m.  He had trained for only two rounds using speed and intervals as his base, only to discover the event having three rounds.

Instead of quitting, he focused his goal on breaking the longtime WR of 4:01 while being a full time student living on a British ration diet. 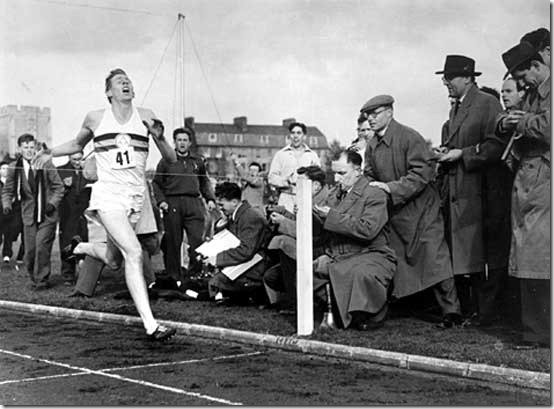 When the speaker announced, “Winning time… three minutes…” the rest was drowned out.  It didn’t matter if it was 3:30 (which ironically is what Sir Roger Bannister thought the WR was capable of, especially with John Landy bringing down that mile to 3:58 only 46 days alter)

Relive that moment below… I never get tired watching it, even if the first 2 laps is like watching water boil.