A recent study has been carried out which has supposedly debunked the whole purposeful practise ‘rule’ is now doing the rounds. I saw it on the Science of Sport Facebook page under the heading RULE “simply does not exist”.

I followed their link to an article in The Smithsonian Mag called The 10,000 hour rule is not real: The biggest meta-analysis of research to date indicates that practice does not make perfect. 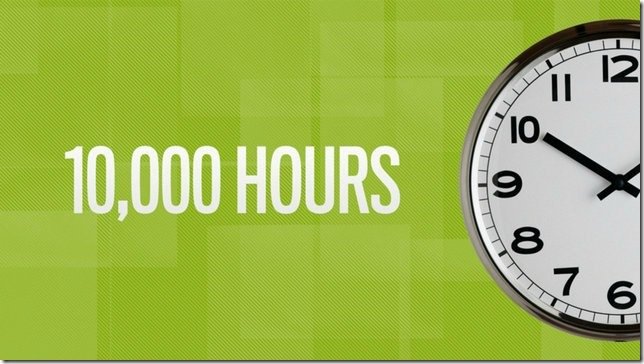 This article ends with

“So despite the new evidence that the 10,000 hour rule is bull, like the studies and articles that came before it, that message will likely fall on deaf ears. The 10,000 hour rule seems to have entered into the common lore about success: it’s a nice idea, that hard work will actually pay off. And no peer reviewed study so far succeeded in toppling that catchy message.”

So in the first instance, I immediately rail against someone attempting to prevent a debate in the way that Rachel Nuwar did in the last paragraph of the Smithsonian article. It basically says, that if you believe the 10,000 hour rule, it is equivalent of believing the earth is flat.

I recently wrote an article reviewing The Sports Gene by David Epstein and in that I wrote:

I saw the 10,000-hour rule for what it was. A construct to tell people that if they wanted to get to the top, they had to really graft and grind. Not just a little bit but almost beyond the imagining of most people. Roughly speaking; 10 years, 1000 hours a year, 20 hours a week. It is an enormous number, but people need to recognise it. It doesn’t matter if you get to the other end and find that you took 7 years or 13 years or whatever. When you start out, that is a long way away and the tolerance is irrelevant in the beginning. 10,000 hours is as good a hook as any to hang the deliberate practice hat on and it works for me as a coach.

But I’ve read the whole of the study and even though the conclusions that the three scientists draw from it are very clear, for them, but, as a coach, I read their report differently to what they did. Here is what they say:

Their claim that individuals differences in performance are largely accounted for by individual differences in amount of deliberate practice is not supported by available empirical evidence.

I will say that their research was exhaustive. I can’t argue with the data they’ve collected. It is impressive. So what did I see that they didn’t?

In their study, they found that in Sports, taking a total variance in performance equal to 100%, the amount attributable to deliberate practise was 18% and the other 82% was unexplained. In my world, the 82% is art. It is the art of coaching, it is all the things that make up an athlete, whether it be genetic differences described by Epstein or anything really. But 18% variance because of deliberate practice? Not only does this not debunk the deliberate practice theories, it even contradicts what they conclude.

Nobody really counts the 10,000 hours as I said above. It is just a big number, like 40 days and 40 nights just means ‘a long time’. The problem I have with these sensationalist articles is that people start to believe that ‘practise does not make perfect’. (They are right of course, practise makes permanent; perfect practise makes perfect). The logical conclusion that some people draw is that practise therefore is not that important. Now that is bull and not only is it being espoused by Miss Nuwar, it is then propagated by sites such as The Science of Sport. If it has science in the title it must be true right?

The truth however is that every coach and athlete knows that deliberate practice is significant and so everyone is deliberately practising as hard as they can, which levels the playing field, despite what the so called experts and scientists conclude or sensationalise.