Was it a Foul? Julius Yego Javelin Kenya National Record

Congrats to Julius Yego of Kenya with his 86.88m Javelin National Record yesterday at the Ostrava Golden Spike 2015.  (Yes, I know what you are thinking.  Kenya is a powerhouse in the Javelin?)

But was it a foul?

We all remember the controversy when Greg Rutherford set the British Long Jump record at an “obscure” meet.  This meet was a Golden Spike meet. 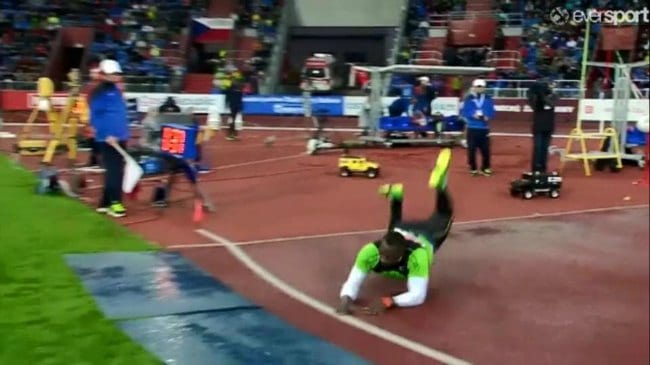 As stated in the rulebook:

It shall be a foul if the competitor, after starting the throw, touches with any part of his/her body the lines demarking, or the ground outside the runway or improperly releases the javelin in making an attempt.

Note the official is clearly watching this, and he puts up the white flag after it is thrown.

What do you think? Is this a foul?