Was Carl Lewis Right about the Long Jump being Pathetic?

You are here: Home / Coaching / Was Carl Lewis Right about the Long Jump being Pathetic?
20
SHARES
FacebookTwitter

When someone criticises a sport when it’s at the lowest point in popularity, usually it’s a sign of seeking attention.

Let’s take a look at what Carl Lewis quoted last week about the state of the Long Jump (before we throw him under the bus): “[The Long Jump is] the worst event in the world right now. Awful.”

“Do you want to go and see someone jump 26 feet? They don’t know how to jump. And they’re not trying to because they’re winning medals anyway. If I jumped 26 feet I’d walk away and say, ‘Don’t measure that, make it a foul.’ Have a standard. You don’t go to the Olympics for a medal. You go for the distance. People want to go and get a medal for jumping 26 feet? Come on.”

“Mike (Powell) and me were jumping 28 feet regularly. But this generation? Rutherford? I’m sorry, but it’s pathetic to me. He’s won everything. Are you kidding me? He’s doing his best. He’s jumping great. But he shouldn’t be winning with that.”

First of all, you can’t compare the Olympic event, especially the London 2012 Olympic long jump, because of the crazy wind conditions (attribute to having a fixed television camera so the they could not use the other end of the runway and pit!).  Carl Lewis wasn’t there, at least not on the runway competing.

But how about stats?  Why 28 feet as a benchmark?

Thanks to my good friend Ian Graham, he gathered these statistics:

MEN’S LONG JUMP 8.50M PERFORMERS PER DECADE… based on outdoor wind-legal performances only!

Looking at the stats, I wouldn’t call the state of long jumping awful.  But with all the money (and fame and media) on the 100m, it’s hard to pull kids away from sprints to be a long jump specialist.

The 400 meter event is a cyclical event in terms of “non-awful” performances.  The USA had a great period in 1968 where the top 10 world list were Americans (sending only 4 to the Olympics).  There were a lot of men who stayed home who could have easily made the National team for another country. 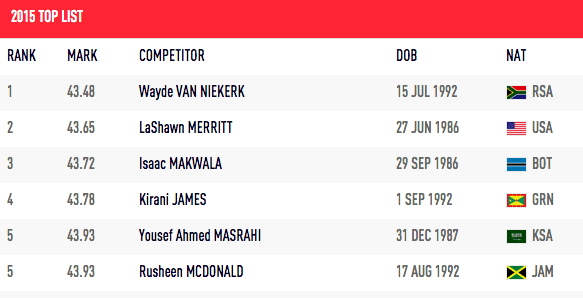 So, yes Carl Lewis, sports is cyclical in terms of peaks and troughs.