This article is guest blogged by Sten Kaiser, creator of the iPhone sprintTimer and iPhone fitnessMeter.

Fully Automatic Timing (FAT) with Photo Finish has long been an established technique to time races at large event like the Olympics since 1948. It has also been a requirement for setting international records for almost half a century. Lower costs for digital imaging and processing have made the technique accessible also for smaller events and many different sports. And a product like SprintTimer has even made it available on smartphones.

Since photo finish images have become more common and on the same time not are what they might seem at first sight, some explanations might be useful. The following is therefore a description of how a photo finish is created and interpreted. To many readers of SpeedEndurance the following description might feel a bit basic, if so it might still be useful when you try to explain it to others.

The first and most important thing to realize is that a photo finish image not is a “frozen moment in time” like a conventional photo, but rather something in between a photo and a video. The camera in a photo finish equipment continuously takes very narrow (often only 1 pixel wide) images of the finish line. These image slices are then placed beside each other and blended to create the photo finish. Below you can see three conventional photos taken at a 0.1s interval and how they relate to the composited photo finish (for clarity the slice width is much exaggerated).

An interesting effect of this procedure is that the width an object is determined by how long time it spends on the finish line. The capture frame rate, the slice width and/or the slice overlap are therefore adjusted so the runner (horse, boat, bike etc) looks acceptable. But that also means that things that move faster or slower, like hands and feet, will look stretched or squeezed. It also means that two similar objects, one close to the camera and one further away, that moves with the same speed will have the same width on the image. But the one further away looks smaller in the camera so its height will be smaller, and it will therefore look a bit stretched compared to the closer one.

In the example above the camera had a vertical resolution of 720 pixels and the slices were 25 px wide and captured at 60 fps (normally 1 px and >1000 fps). This means that 1 pixel horizontally represents 1/25*60 = 0.667 ms in time. This allows us (or rather the computer) to measure distances on the image and convert it to time lines that give the time for each runner.

Where the line should be placed differs according to the rules in each sport.

Running humans is the most problematic case since the foremost part of the torso can be difficult to define, especially when one shoulder/arm is pushed forward. But the IAAF rules states: ”The endpoint of the torso is the outer end / articulation of the collarbone (clavicle).” How this is interpreted in an extreme case can be seen in the photo finish from the Ladies 400m at the Rio olympics. 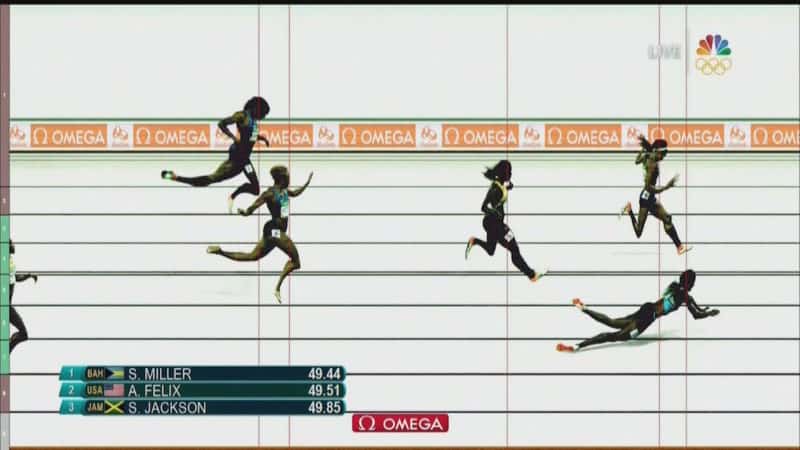 The lack of normal perspective in the image can sometimes make it difficult to identify the runners and determine in which lane they are running. Hip numbers can help in this case and on a sunny day the shadows can be used (see the first examples).

Despite these challenges is a photo finish the most accurate and versatile technique available for timing events where multiple racers share the same finish line.