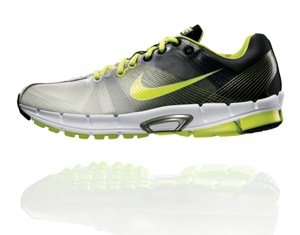 The goal for the Nike Zoom Victory + was to create what the design team called “The Ultimate Naked Ride.” They wanted to make a super-minimal performance training shoe that translated the Nike Zoom Victory Track Spike’s revolutionary Flywire technology into something runners could wear every day. But transforming a track spike’s elite technologies into a running shoe is never an easy process. Spikes are designed to be as minimal as possible, while running shoes need cushioning and extra support for all the mileage athletes rack up in daily workouts. Nike’s design and development team was unwilling to sacrifice any of Flywire’s lightweight performance, but it needed to make footwear that could withstand frequent 10 to 15 mile runs. That process took well over a year, but the resulting success was the Nike Zoom Victory +.

Flywire is the innovation driving Nike’s strongest and lightest footwear. The shoe’s entire structure comes from super-strong filaments. They provide precise support akin to the cables in a suspension bridge and allow a radical reduction in weight with material only where it’s needed. The Flywire filaments themselves are tuned exactly to the foot’s needs, almost like an additional ligament. Utilizing a stretchy material, the upper can give around the metatarsal while providing extra strength and protection in the forefoot and heel important for runners racking up training miles.

The process started with testing different Flywire configurations to ensure the cable configuration was in the correct place for a training shoe. Once the fibers were adjusted, the design and development team did dynamic fit tests. Athletes ran track workouts in prototypes, performing a set number of 400s at different paces to ensure the upper functioned with enough support to withstand the additional forces encountered when cornering around the track at a brisk 5k pace.

The biggest challenge, though, was getting the fit right. Running shoes are typically constructed with overlays, whereas by its very nature Flywire eliminates excess material. When the design team first put pairs onto people’s feet, the sizing was different. Using Flywire meant the upper was so thin that the design team needed to adjust the last and pattern of Nike Zoom Victory +. Once that was nailed, the Nike Sports Research Lab (NSRL) started long-term wear testing. Since the technology is geared towards advanced and elite athletes, during their eight-week wear-tests runners were often logging between 300 and 450 miles in the shoe.

To accommodate such mileage, the design team worked closely with the NSRL to create flex grooves in the outsole that mimic the foot’s natural articulation. Soft Cushlon foam paired with low-profile and highly responsive Zoom Air ensured the Nike Zoom Victory + kept the minimal feel of the original track spike. Even the Nike Swoosh was printed directly onto the upper instead of adding any extra material. Now, the Nike Zoom Victory + weighs just over 9 ounces and the upper a mere 3.5 ounces.