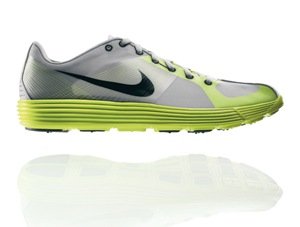 Given Flywire’s early success with middle-distance Track and Field events, bringing its lightweight support to distance racing seemed natural. So, too, did marrying the technology with Lunarlite foam, Nike”s most advanced new cushioning system. Flywire works like cables on a suspension bridge, providing precisely engineered support for the foot. The Flywire filaments are placed only where support is required, allowing for the reduction of materials, which equals reduction of weight. Made with Flywire, an upper weighs mere grams, while Lunarlite foam is both lightweight and highly responsive, two qualities which are usually mutually exclusive in cushioning. The foam also distributes the pressure patterns more evenly across the foot to protect it from pain and injury all important for distance events.

In the Nike Zoom Victory Spike designed for middle distance Track and Field events, Flywire proved a great success in competition. After Nike athletes Kara Goucher and Bernard Lagat both medaled in the 2007 World Track & Field Championships in Osaka, designers looked at where else the innovation could be applied. The marathon was a natural choice. On race day, marathon runners sacrifice cushioning. It’s not responsive enough, meaning that it absorbs too much energy so marathoners end up expending more energy as they run. The race might be more comfortable but it’s more work, and at 26.2 miles, energy conservation is critical. Nike designers didn”t think distance runners should have to sacrifice either in a road race, so they came up with a lightweight racing flat, the LunaRacer, that wasn”t stiff, that was soft and returned energy to the athlete.

Articulated with flex grooves, the LunaRacer’s outsole follows the foot’s natural motion, while Flywire works with the foot, stretching where an athlete needs it and providing support where it’s needed almost like an extra ligament. Over the metatarsal area, Flywire gives an important feature in a grueling road race, while simultaneously locking down the midfoot and heel.

The design team found that with a more flexible midsole and outsole, a Flywire upper has a more dynamic fit. As the technology”s creator Jay Meschter explains, “We started to realize the relationship of the bottom of the upper. Because you have an upper that’s holding the foot accurately, when you put on firm outsoles, they compromise the fit. With a compliant, moveable outsole, you can actually feel the cable all the way around the foot instead of just landing on this hard plank on the bottom of your foot, which causes the Flywire upper to tent out to the side.”

The LunaRacer weighs a mere 5.5 ounces, and elite athletes who’ve experienced Lunarlite foam cushioning are reporting that after their long runs, they feel less beat upâ€”a good sign for the marathon in Beijing.