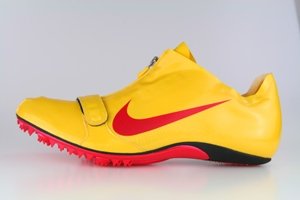 Designed especially for Liu Xiang, the Zoom Aerofly LX s is a revolutionary spike utilizing the innovative Flywire technology in combination with a special synthetic leather in order to provide Liu Xiang with a featherlight shoe that provides maximum support. On August 18, 2008, Liu Xiang will wear the all new Zoom Aerofly LX spikes at the Beijing Games for the whole world to see.

Imagine a paper-thin shoe with an upper whose only support comes from threads. This is Flywire Nike’s revolutionary lightweight support system. Flywire is a performance architecture that utilizes very thin and incredibly strong fibers to support the foot alllowing Nike designers to create some of the lightest footwear to date. Flywire consists of high-density nylon fibers placed in carefully chosen locations, precisely where the foot needs it. These fibers act like an extra layer of epidermis containing light, man-made tendons and also shave weight off the shoe. Flywire also provides a supported, locked-down fit reduce foot slippage within the shoe, something that wastes a significant amount of energy per stride.

Nike designers engineered the upper of the Zoom Aerofly LX with the strap and zipper design that Liu Xiang is accustomed to. Knowing that Liu Xiang’s was looking for added protection for his right foot, the designers increased the thickness of the padding at the heel to increase support around his ankle.

For the outsole, Nike designers studied the performance needs of Liu Xiang. A powerful and explosive hurdler, Liu Xiang hits the ground hard with each stride and must spring up quickly after impact. To meet these needs, Nike’s designers utilized specially made mico-carbon soles to provide firm frontal support. Knowing that Liu Xiang lands on his forefoot following a hurdle, the designers used micro-carbon material in the forefoot to help provide forefoot support. Working closely with the Nike designers, one of the things that he likes best is that there are only 5 spikes at the front, reducing the weight of the shoe. The ergonomically placed spikes also helped to reduce pressure on the forefoot and increase traction. In response to his specially designed spike, Liu Xiang said that “the uppers fit the foot perfectly and are incredibly light and comfortable.”

Since Liu Xiang began working with Nike in 2002, Nike established a special task force to design spikes for Liu Xiang, including the design and research of all of Liu Xiang’s footwear and related products. To meet his needs, designers travel all over the world following Liu Xiang to the sites of his competitions and practice meets in order to communicate with him. Liu Xiang also travels to Nike’s world headquarters for an in-depth discussion with the design team.

The intimate coordination between Liu Xiang and the design team lead to many dramatic victories:

Liu Xiang’s favorite of Nike’s original spikes, in 2004 the Zoom Superfly G5 became the basis for Nike’s future designs for Liu Xiang. During the year he ran with Zoom Superfly G5, Liu Xiang won an Olympic gold at the Athens Games.

In July of 2006, Liu Xiang wore the Zoom Superfly G5 LX with its new micro-carbon back plate to break the world record for the 100 meter men’s hurdle. His time of 12.88 seconds broke a record that had been untouched for 13 years.

In December of 2006, at the 15th Asian Games in Doha, Qatar, Liu Xiang wore the Zoom Hurdle Liu, designed especially for these games. The shoes carried him to take first prize, and to break the record for the Asian Games.

In August of 2008, the all new Zoom Aerofly LX will accompany Liu Xiang to the Beijing Olympic Games.