The concept is simple, but in reality, the answer is difficult.

If you take a 10.20 100 meter sprinter, and reduce his ground contact time by 0.01 seconds, then the 45 strides can reduced his time to 9.75 seconds by shaving off 0.45. Good enough for an Olympic Silver medal behind you know who.

We discussed this in detail at the 2007 USATF NPEP with Dr. Ralph Mann.

Of course, you can’t reduce the ground contact at the expense of losing speed.

The following chart from the Scientific Report on the II World Championships in Athletics – Rome 1987 shows the reality. This race was the famous dual between Ben Johnson and Carl Lewis where Ben ran a 9.83 World Record but tested clean in the doping control following the race. 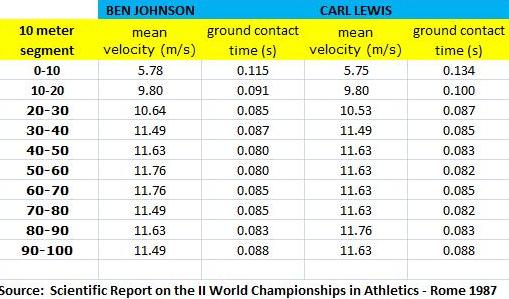 High speed cameras were used to captured frames at a frequency of 200 and 500 frames/sec.

To overcome inertia in the early stages of the race, ground contact time is increased as more power is generated to the ground.

What is interesting is the ground contact times are fairly consistent after 20-30 meters in both Ben and Carl. Even when the sprinter is still accelerating between 30-60 meters, the times are consistent to the nearest hundredths of a second.

So the Million Dollar Question is: How do we decrease ground contact time from 0.08X to 0.07X seconds? How do we get there without losing speed?

You can’t give more power – we know that increases ground contact time. And too much “air time” is also no good.

Thus the simple formula of:

… is really much more complicated that it appears, if you want to optimize your time. Perhaps that is why we don’t see Personal Best and World Records every day. Or see hundreds of sprinters running 9.69.

There are a lot of theories, arguments and different training programs on how you might get there which I’ll post in the upcoming weeks.