NOTE: Some of my older guest posts on other Websites are now being shut down due to the economic climate. Thus I will present them here.

How much do the tight indoor curves affect your performance?

Even with the banked curves to counteract the centripetal forces, it does affect your stride length and stride frequency, and therefore your time will be slower.

Also, with banked curves, you have a slight uphill grade going into the curve, then a favourable downhill grade coming off the turn.  Lane 6 for the 200m or 300m starts halfway on the curve, so you literally start the race downhill.

You can read more about the fairness of Lane draws for indoor 200-400 meters in my past article.

You also race less indoors than outdoors, so the sample size is different.  The CIS Canadian College system does not have an Outdoor season or championship.

More emphasis is on outdoors, of course.  So this isn’t an apple to orange comparison, but perhaps a Fuji Apple to a Gala Apple.  Still apples, but…

But by how much? 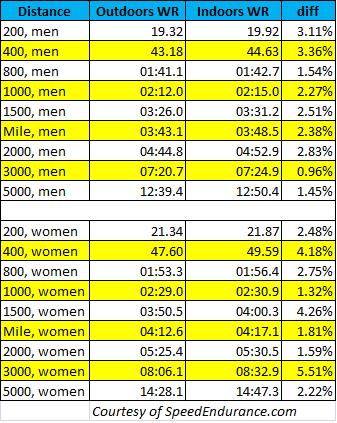 One thing to note is the Women’s world records.  Some of the women’s performances were from Eastern Bloc athletes who didn’t focus on indoors.  Again, a bad sample size pool.

So when it comes time to get a ballpark figure for your Youth or Junior Development athletes, I would be generous and guestimate 3% for the sprints, and 2% for the middle distance and distance events?.

I don’t coach Youth athletes, so I don’t have a number for extrapolating performances.