I am currently north of Rome where half my friends are AC Roma (or just Roma) and the other half are S.S. Lazio (or just Lazio) fans of the Italian Football (Soccer) league.

Roma has gained a lot of popularity because in the past 3 years, as they lost to Inter Milan (F.C. Internazionale Milan) in the Italian League Championships each time.  The top four of 20 teams in the “Serie A” division qualifies for the UEFA Champions League.

There is definitely a rivalry here and I don’t want to cheer for the wrong team as I may get seriously hurt at the local bar.

The big news this summer is Inter Milan, AC Milan, Chelsea and America are currently playing in the 2009 World Football Challenge.

Here is a press release from NIKE.  Note the uniforms are made with the same Dri-FIT material as running gear. 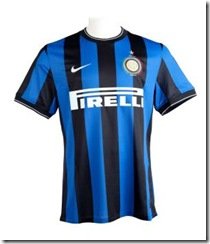 Last night, Nike unveiled the new 2009/2010 Inter Milan soccer kit at The Montalbán Theater in Hollywood in front of hundreds of fans and celebrities. The event featured a blue carpet arrival by team players and dignitaries as well as a runway show displaying the history of the team kit.

This year, Inter Milan celebrates the 100th anniversary of its first national championship and the kit draws inspiration from the glorious past of the blue and black club. The reigning Italian League champions will wear the new uniform next season as well in the much anticipated World Football Challenge Tournament in the US that will see the squad go up against other soccer giants including Club America, Italian rivals AC Milan and Chelsea. The team is in Los Angeles where they will face Chelsea on July 21st, 2009.

“We are very proud to have Inter Milan, one of the premium soccer clubs of Europe and the world, as part of the Nike family,” said Bert Hoyt, VP/GM Global Football/Soccer for Nike. “We look forward to seeing the club win many more championships during the next 100 years.” 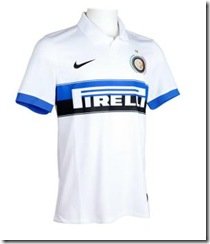 The cut and design of Nike’s new jersey reflects the care and elegance of Italian tailoring, especially of that found in Milan, bringing the style and passion for detail from the runways to the soccer pitch.

The uniform is made with Dri-FIT fabric, a cross-category and successful versatile, sweat management fabric resulting from years of research and testing. Nike Dri-FIT apparel is designed to keep players drier, cooler and lighter by drawing sweat from the body to the fabric’s surface; the three-dimensional structure creates air space around the skin, reducing clinging and making athletes more comfortable on the field.

The first jersey is a crew-neck, instantly recognizable by its famous black and royal blue stripes, and features contrasting black with white piping at the neck and arm bands. A special detail sees the stripes on the front and back of the jersey not. On the front, the central stripe is black while on the back, it is the opposite color.

The design draws inspiration from the jerseys worn during the 1965/66 season that had a star above the club’s crest. That year Inter won its tenth national championship and its second Intercontinental Cup. The Internazionale Football Club crest that celebrates the 100th anniversary of the first title is enclosed in a circle with the colors of the Italian flag.

Inside the back collar is the Milan city crest, a classic red cross on a white background, while a label on the side seam reads "100th Anniversary of the First Inter National Championship 1909/10".

The matching shorts are black and have the Milan city crest on the back center of the waistband. The shorts’ draw strings have end-caps with “Inter” written on them, while the socks are black with a thin royal blue stripe and "Inter" written along the calf.

The second jersey is mostly white, with a white collar and a band of blue-black at the center of the chest. This away-game uniform has matching white shorts with a blue stripe up the side, and white socks with a blue-black band and "Inter" written along the calf.