It’s a shame Asafa Powell is injured as the top 3 guns would have been the A-card event of the night.

But when Usain Bolt shows up, he’s always the A-card.

The only reason why Usain Bolt is running at Stockholm, Sweden is the UK tax issue that prevented him from running at next week’s Diamond League in London, UK.

Glen Mill is a smart coach. He knows a 100 meter sprinter needs certain number of races to get sharp and find all the zones.  We saw what happened to Tyson Gay last year in Beijing 2008 after his horrendous injury at the USATF Olympic Trials.

I always suggest 5-7 races before a major meet for the 100 meters, and 3-5 races for the 400m.  Walter Dix knows this too and he ended up running in Nova Scotia, Canada!

To race well, you need to race.  There is no substitute.  Not even for super-human Usain Bolt. 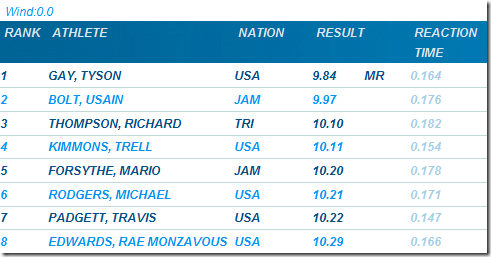 Here is the Usain Bolt upset from Tyson Gay in the 100 meter showdown!