How to Learn and Apply Mental Imagery & Visualization Techniques

You are here: Home / Coaching / How to Learn and Apply Mental Imagery & Visualization Techniques
29
SHARES
FacebookTwitter

This Blog has a lot of coaching success articles, but not one article on how to do learn and apply mental imagery & visualization techniques.

So it is with great pleasure to have this article written by Elisavet Velentza, Department of Physical Education & Sport Science, at the University of Thessaly, Greece.

A large amount of studies suggest the importance of psychological skills and strategies in order to enhance performance. Additionally many researches have been made to examine the control of mental imagery and visualization and their impact upon performance.

The brain regions responsible for motor execution appear to be also responsible for imagery processes under conscious thought without the intended movement being evoked (Decety, 1996; Jeannerod, 1995). That means, those neural operations involved in executing motor coordination also play a role in mentally representing those actions in conscious thought, through imagery, without generating the actual movement. However, imagining the event happening is not enough to elicit the correct imagery process, and like motor skills, if the mental imagery technique is performed inadequately, without sufficient attention on appropriate execution, subsequent gains in motor performance will be substandard.

There are many requirements in achieving the desired effect of mental imagery, but the first is the approach to teaching and learning the specific techniques. It is important to have a conceptual (ideas of movement) and a symbolical (language representations) knowledge of mental imagery (Annett, 1995, 1996). For example procedural knowledge is the knowledge of “knowing how” to do mental imagery based on performance results, i.e., the success achieved in mentally forming the correct image in the mind. And declarative knowledge is different because it is the knowledge of “knowing that”, or the concept or idea behind the mental imagery method in order to gain an understanding of the mental imagery process, and intervening conceptually, or symbolically to assist understanding. So the actual mental training in sport psychology is repeated self-imagining of a sporting activity place without the act actively exercises. An improvement of the movement pattern in the intensive-conscious idea would improve the later actually running a cycle. The effect obtained depends on how lively the idea succeeds, that is, how well it manages to put oneself in the movement and recreate the internal processes. For effective training is a mental change between training and actual training important to the plot, in the mind again and again to align with the executed real action. So imagining the skill, and actually performing the skill, needs to be as closely executed as possible for effective transfer and reinforcement to neural structures (Currie & Ravenscroft, 1997). Thus, mental imagery competency requires a degree of attention and psychological effort to elicit the desired effect.

Therefore is going to be presented some examples/exercises, for a better understanding and practicing of “mental training- visualization” in technique sports, using the example of a long jump mental training. The instructions include what the coach but also what the athlete should do. 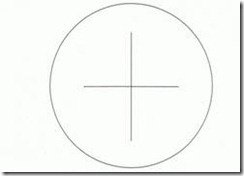 Once the pendulum has reached the rotation, open your eyes and you feel that also the muscles are activated, which they have moved the pendulum in the desired direction.

You see: Performances cause a reaction in the muscles (Carpenter effect).
But: One must also work hard at it – nothing happens by itself …

2. For the next exercise you should cover your eyes.

Get used to this handicap.

Part 1: It is again an improvement of your imagination. Here are your training shoes, take them and feel every detail. Can you see it in your mind? Your job now is to tie the laces of your shoes with your eyes covered.

This exercise should train your ability to imagine. Try to see in your mental eye exactly your movement, as if you had your eyes open.

(a place in the sports hall – ex: Look at the long jump or at the lane)

Next exercise is to see exactly a picture of a sport hall. Close now your eyes. Inhale and exhale calm and deep. Imagine intensive that your eyes are the lens of a camera. With a command of your coach or a teammate open your eyes for 1 sec. and look at the lane. Then close your eyes immediately. Take a photo from the lane. Describe with your eyes closed, what can you see through your mental eyes: Where are the other athletes? What is the color of Martins’ T-shirt? How many Hurdles are set up? It is not bad, when you make mistakes; you may take another photo and you can refine further the picture in your mind.

Did you understand everything?

Ok, open your eyes for 1 sec.! And close them again. Turn now with your back on the lane and describe your coach or your teammate, what do you see.

Exercise details (for you and your coach):

4. Make a script, compare it with the Video

This is a description of the technique of a movement. Write down exactly, for example, what you are doing in long jump. Everything from the “I” perspective, for ex: I stand at my mark and I concentrate on what I want to do. Then…

This process will last 30min; you must think intensive your technique. Finally you can do a few attempts, which can be recorded in video.

In the next step athletes and coaches look together the video to optimize the process, where the erroneous positions from the script will be corrected. Finally there is a precise description of the technique, with all the details. And everything would be in your language with your own words.

Next exercise is that every athlete should make a presentation in front of the group, so as to learn by heart the script. Furthermore he/she will present his/her script under different circumstances (after the training, blind, on the wobble broad).

What to look for:

Find a detailed photo and see exactly your technique, over and over again (Huppers & Draksal, 2006).

See also  Beyond the Olympic Medals: Where Do We Go Now?

Huppers and Draksal (2006) suggested that the script will be further improved according to the video. Now take the script and find your key points. Use your own words in order to explain exactly what is happening in every position. For example in long jump:

And now what do the key points mean for you? This procedure will last approximately 20 minutes.

6. Initiate the feeling of the movement

7. Identification of the intensity

Huppers and Draksal (2006) question is : How much tense do you feel? It is meant the degree of your mental activation and not the muscle activation.

Your degree of activation is like the electricity flowing through a light bulb. You shall shine in the race nice and bright! If the current is too low, you stay unimpressive and behind your capabilities – is there too much electricity, the lamp burns out and it cannot go any further. If everything goes perfectly you’re neither tired/suspended/bored … either too busy/nervous/headless. This condition is called Flow. Assumed, that sleep would be at 0 and panic at 100th. Then, the flow state is exactly at 50th.

Now according to this example, you can find your own activation level.

( i ) Stand upright, close your eyes and recall in your memory the key points of the movement in the correct order and speed. Pay attention of the different feelings of this particular movement. Is the feeling right, as if you are doing a real attempt. See through your mental eyes, how would have been if you have performed an actual attempt. Furthermore when you have licked it realistic and intense, you should feel the same degree of activation as in your real attempt. So, practicing mental imagery means that it is an aim of recruiting as much sensory information of the actual skill as possible. Therefore, not only should the individual draw in as much sensory information as possible, and the necessary conscious control of the image, but also evocation of the emotional content specific to the skill intended. That is, retrieving the desired arousal and attention processes involved before the initiation of the skill sequence (Huppers & Draksal, 2006).

ii. It is better to do 5 mental attempts pro training session with high concentration, rather too many with low concentration.

iii. The best results come with a combination of real and mental Training:

iv. It must be trained always in a standing position, because the mental training must be similar as the real.

v. You should be in the majority in a relaxed status. However, when you are at an advanced level, you should make mental training after an exercise, ex. first a 400-run sub maximal, then immediately mental technique training.

vi. It should be always practiced on a certain structure.

vii. The periodization of mental training is taken place mostly in the phase where you build your abilities up; it is advisable not to start practicing it just before a great race. Eventually it should begin 8 weeks before a race (Huppers & Draksal, 2006).

i. Time measurement: Compare between real-mental

Huppers and Draksal (2006) advised you to visualize the technique that you are doing in reality. So the times of the attempt through mental training should be matched with the execution times of the real attempt. Swimmers are able to estimate the tenths of a second accurately, and also the intermediate times at the turn match with the real time.

->  Take the time for 3 real and 3 mental attempts and compare. The more the times are matching; the better is your mental training of your technique.

Huppers and Draksal (2006) suggested that you should have always the same “visualization” of your technique, at all times the same film. That means that the time should match between the mental training of the attempts.

->  Take the times from 5 mental attempts and compare. The more the times are matching; the better is your mental training of your technique.

Concluding technical sports are using more imagery and visualization than others sports. There are many guidelines to enhance the imagery process (Ievleva & Orlick, 1991; Martens, 1987, Rushall, 1992). Except the example of practicing imagery/visualization in the first person, there are also some guidelines that include some more information: It is being used not only visual and temporal data, but also acoustic (hearing), olfaction (smell), gustation (taste), and kinesthesia (body awareness). By finding in as much of the sensory information as possible concerning the conditions of skill performance the more realistic simulation of the mental imagery process can be created. Secondly it is important to have the ability to mentally control the image in a dynamic mode. For example, visualization of the image dynamically in first person and third person, or the individual attempts to “see” the performance of the motor skill through their eyes (first person), as well as the eyes of another person observing them (third person). Creating third person and first person visualization allows a multiply perspectives to the continually changing environment to make the process more objective that would be difficult in first person imagery. However, ultimately, the individual must master first person perspective in order to simulate actual events.

These aspects of the mental imagery process need to be constantly practiced in order to elicit results. Even though individual differences exist in mental imagery ability, generally, better imagery control correlates to better performance in the motor skill (Annett, 1995).

Elisavet Velentza is currently doing an European Masters’ Degree in Sport & Exercise Psychology at the University of Thessaly, Greece.