This Is Your Life – Jesse Owens

You are here: Home / Life & Culture / This Is Your Life – Jesse Owens
2
SHARES
FacebookTwitter

This Is Your Life Olympic Champions – Jesse Owens and Duke Kahanamoku

February is Black History Month in the USA and Canada.  In the UK, it is celebrated in October.

I’m not sure how many readers remember the TV show This is Your Life with Ralph Edwards.  It was aired on Black and White TV from 1952 to 1961.

The TV Show would honour the guest by taking them through their life in front of a live audience including friends and family.  At first, you only hear the special guest’s voice before coming on to the stage.

In 1960, they hosted Jesse Owens, the four time Gold Medalist at the 1936 Berlin Olympics.

The show, This Is Your Life Olympic Champions – Jesse Owens, is now re-released on DVD and beautifully restored.  (Bonus material includes Duke Kahanamoku, a.k.a. "The Father of Surfing."  He won 3 Golds and 2 Silvers spanning five Olympics)

I think the show is great, as they brought in his former coaches (High School, College, and Olympic coaches), his training partners, his 4x100m relay teammates Frank Wykoff and Ralph Metcalfe (Floyd Draper was killed in the war), and of course, his first and only wife of 45 years, Minnie Ruth Solomon. 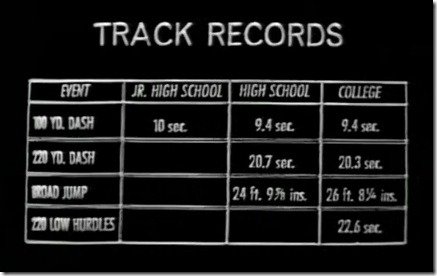 Just a bit of history here.  Frank Wykoff set the 100 yard WR in 1930 with a time of 9.4 seconds without starting blocks.  In 1933, Jesse Owens ran 9.4 equaling the WR, but more importantly, setting a high school record (see picture, above)

This Is Your Life – Jesse Owens Interview – Video Part 1

This Is Your Life – Jesse Owens Interview – Video Part 2