The Men’s race was interesting.  I expected a 4 way battle between Belgium, France, UK (actually Great Britain and Northern Ireland) and Russia.  Belgium has the Borlee twins, so having them first and anchor makes total sense.

But the race was won on the 3rd leg, with Mamoudou Elimane Hanne of France moving up from 4th place to first by passing on the INSIDE with less than 100 meters to go!  I can’t believe those other 3 guys were being so nice to the French!

It’s a good thing he didn’t get DQ’ed like Ireland’s David Gillick at the 2010 World Indoor Championships at Doha, Qata!

For the Women’s 4×400 meters, it’s great to see Great Britain and Northern Ireland medal (silver), and I know they are hoping to win a medal (as UK) at the London 2012 Olympics on their home turf, but they will be hard pressed with the Russians, Americans and Jamaicans.    We’ll have to wait and see the status of some athletes who had recently changed passports, like Shana Cox from Penn Sate. 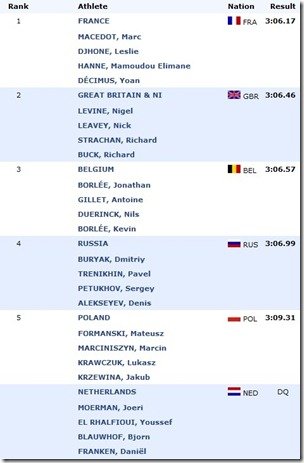 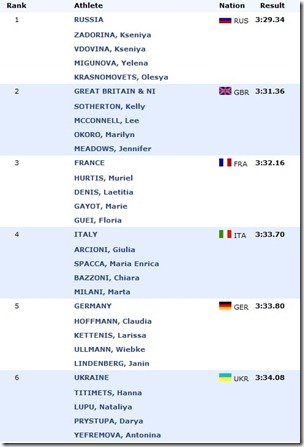