How to Run Faster… at any Age

You are here: Home / Coaching / How to Run Faster… at any Age
18
SHARES
FacebookTwitter

Every week, I get several emails from readers on how to run faster.   Some are from parents of pre-teen children in Track, Soccer and Football.  Other readers include Masters athletes.

I’ll share some of the  highlights from my various phone calls here in this article.

And, as per usual, I’ll keep it simple and to the point.

There are only 2 things to know on how to run faster:

So when these gurus offer the next greatest DVD or expensive training camp, the above 2 points is all you really need to know.

(At least when I hold a private training camp, you get to enjoy the wonders of Italy… food, culture and history!)

Being efficient in whatever you do is the key to success.  Anywhere from your golf swing, studying for exams, or cooking an Italian dinner.    Sprinting is a skill that must be coached.  Granted, having the right genetics help, but the point is anyone can ran faster if you improve your technique, and become more efficient at it.

If I prescribe 10 x 200m, or 8 x 300m at 65-70% max speed, I can assure you any bad technique will be corrected.  Whether it’s overstriding, or flailing arms (I swear these kids are holding invisible school books under their armpits), eventually you will learn how to run efficiently to get through the workout without throwing up.  That’s where I come in and give constructive criticism on your interval runs.

Think of the early Beatles playing 7 hour gigs in Hamburg, Germany.  You have to become really efficient with your guitar strumming and vocal chords, or you will be in a world of hurt!

When mechanics are perfected, the only way to increase speed is to develop the ability to generate force at greater range of motions.

I’ll skip the technical sprinting tips for another day.

Sprinting is a game of physics.  It’s all about vectors and I outlined that in my recent book The Rocket Sprint Start (with Bud Winter).  Even the wind has vectors, especially in the 200m.

So here are some considerations when developing a strength program, from Youths all the way to Masters athletes.

The stronger you are, the more force you’ll be able to apply to the ground, which will make you faster.  To get faster, strength training is based on two equations:

So here are 6 tips I recommend to everyone who wants to run faster and be a better sprinter.

(1) Start with GPP and general strength training.  You have to be fit first, and I’ve always said you have to be an athlete first before you can become a sprinter.  Lazy athletes need not apply.

(2) Keep strength exercises on stable footing, and even surfaces.   (i.e. foot contact with a non-moving ground) These include squats and deadlifts.  Keep in mind the specifc movements to the skill of sprinting, that is, muscle and joint angles for the triple extension of the hip, knee, and ankle.The point I am trying to make is don’t do the bench press while resting on a physio ball on your upper back.   Or squat while standing one leg on a bosu ball.

(3) Incorporate single leg exercises, but be careful.  These can include bounding or hopping for plyometrics, lunges or Bulgarian/Borzov split squats.  For the latter, I like to advance the single legged squat in 3 phases:

(4) Plyometrics, including hurdle hops,  depth jumps, and med ball throws.  I covered this topic in several blog articles in a 6 part series on Plyometrics, Ground Contact Time, and Sprinting.

(5) Olympic lifts, including power cleans (i.e. clean and jerk without the jerk).  Save the snatch for elite and more serious athletes.  I recommend as young as 14 or 15 years old to start doing Olympic lifting, and really pay attention to technique.  Use a broomstick as the very first set… seriously.  Don’t rush the workout. 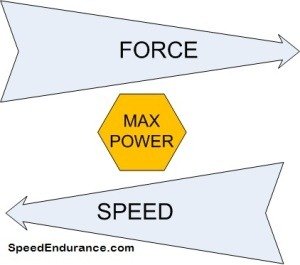 (6) Different loads must be used for power training.The greater the force, the lesser the speed.  The greater the speed, the lesser the force.  Thus for maximum power, there is a sweetspot between the two (see the 4 part series on force velocity curve and work backwards). As a percentage of 1RM, peak power can be obtained as low as 30% of 1RM.    It’s all about the maximum rate of force development (RFD).

This was my demise during my College years.  I was fairly big & muscular and very strong in the weight room at the static lifts like bench press and squats, but I could never translate that to the track.  I never broke 7.00 seconds in the 60 meters.  Years later, I realized I didn’t have that explosive power required for the first 30 meters.  My teammates would gain 2 meters in the first 30m, and I could never make it up.

For example, sprinting is at speeds up to 5 strides per second, or at velocities up to 12 meters per second (over 27.8 miles per hour, or 44.7 Kilometers per hour, to be exact).  There’s no way you can do squats, or pushups, or even sit-ups at that speed movement.   So if your 1RM is 405lbs for the squat, you should be doing doubles or triples (2 or 3 reps) as slightly less weight (i.e. 90%), and considering doing 3-5 reps with an explosive upward movement at even lighter weight.