I want to congratulate Wallace Spearmon on his last minute victory at the Manchester Great City Games 150 meters.  Walter Dix pulled out at the last minute, so he had very little time to pack his bags and “cross the pond”.  Be sure to follow him on Twitter at http://twitter.com/PrinceSpearmon

As expected, Dwayne Chambers gets off to a rocket start, but eventually the speed endurance of Wallace Spearmon closes the gap for an easy victory. 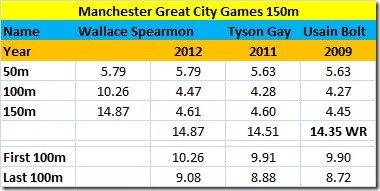 Here is the video from BBC: