This is Part 2 of my trip to Barcelona.  Click here for Part 1 IAAF Centenary Historic Exhibition

The Museu Olímpic i de l’Esport Joan Antoni Samaranch in Barcelona is situated next to the 1992 Olympic Stadium or behind the Museu Nacional d’Art de Catalunya (MNAC or National Art Museum of Catalonia).  The Olympic Museum costs 4.55 euros ($5.90 USD) and well worth the visit if you are a fan of any Olympic sport.

The exhibit is for all Olympic sports, and there’s something for everyone, even kids.

The exhibit starts at the beginning of the Olympics, well before 776BC,  and traces the steps to London 2012.

All sports (current and discontinued), all abilities (able bodies and paralympics), and both men and women are featured.  They make use of story telling, showcasing items of yesteryear on display, plenty of audio and visual aids, and of course, interactive games.

In the basement, there was a speed-agility test where you had 30 or 60 seconds to touch a series of random lights.

There was also a vertical jump test based on the flight time of the vertical jump (using a timing system from take off to landing).  It listed the best jump from a visiting athlete at 71cm (28 inches) and one from the best visitor at 48cm (19 inches).

I decided to give it a try in normal clothes and no warm up (not a good idea with my tender Achilles) and could only score 43cm or 17 inches!  My best was 29 inches back when the Olympics were in Barcelona 20 years ago!  20 years later and my vertical jump drops 12 inches.  And you wonder why aging Decathletes suffer with high jump as they get older?

The handrail of the access ramp is made out of transparent screens that allow, in real time and size, the transformation of the space into a 400m Track or an Olympic size swimming pool which showed Carl Lewis or Mark Spitz run or swim the 100 meter race.

One of my favorite exhibits was the collection of Olympic torches from both Summer and Winter Games.

If you go to Barcelona, be sure to visit this Museum.  It’s also free the first Sunday of each month. 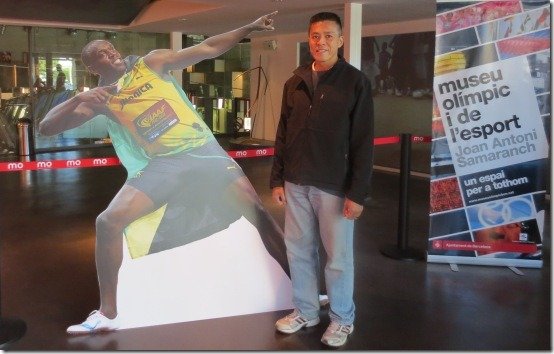 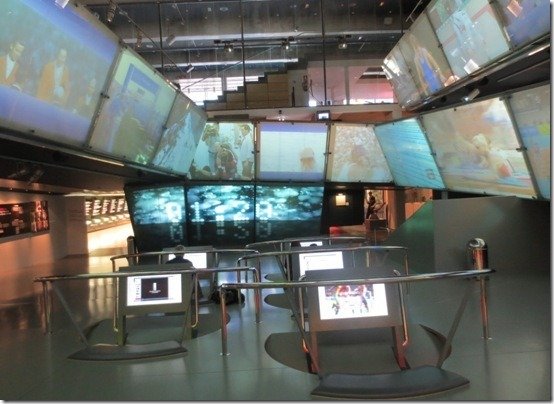 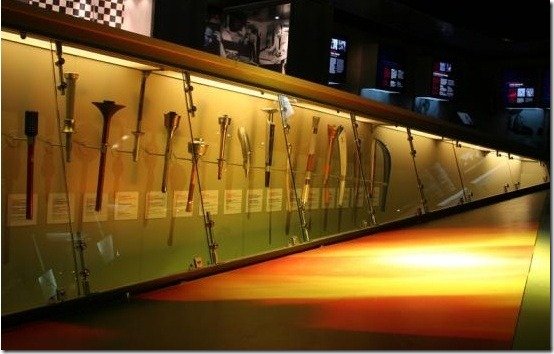