My last article on How to Improve Your Last 100m in the 400m was left open ended where we concluded there are many ways to improve that final straightaway.

There were a few good comments, but every coach has their own methodologies and secrets.

Mike Hurst coached Australian sprinters to qualify for five consecutive Olympic Games (1980 Moscow to 1996 Atlanta). Two of his protégés, Maree Holland and Darren Clark, set Australian records and were 400m finalists at the 1988 Seoul Olympics.  You can read more of his training in my Freelap Friday Five interview.

In this article he comments on his coaching experience.

And remember, your mileage 400 meters may vary!

Mike Hurst on How to Improve Your Last 100m

There seems to be agreement among most coaches of athletes who race over 400m that the final 100m of the event is a test of strength. For those tripped up by semantics,  you may prefer to call the final 100m a test of endurance.

Either way race model analysis shows the home straight is almost invariably the slowest 100m segmental of the 400m race for men as it is for women.

How do we help the athlete improve that last 100m? The answer is multiple choice and experience shows there are several correct options: 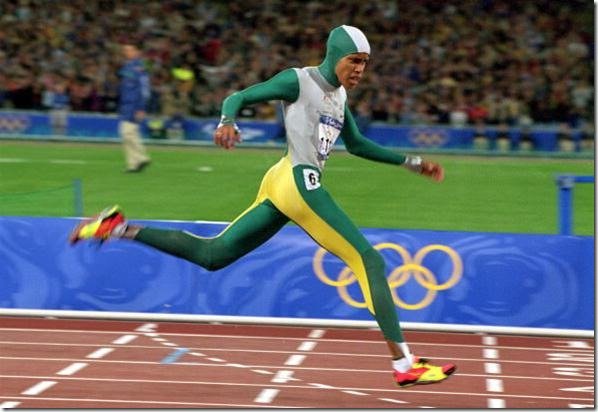 Ration your energy during the race,  don’t go too fast too early. That’s pretty obvious to anyone who has suffered the bear leaping on his/her back in a survival slog to the finish line. But how fast is too fast? Well, what we’re really talking about here is “Speed Reserve” .

My own coaching experience and research suggests there is no factor more important in 400m endurance than Speed Reserve. By that we mean how comfortable are you running at say the halfway stage of your 400m. There is a powerful element of brinksmanship in tactics for the long sprints, more so in the 400m than 200m.

You cannot hurt an opponent other than by disrupting his rhythm, by taking him out of his comfort zone. In other words … forcing him to keep up or quit. It’s true that speed kills but it is a double edged sword.

That’s where Speed Reserve is a lifesaver. There are various calculations given for working out optimal pace but I recommend that a male should not run the first 200m faster than within 0.8sec of his current season’s best for 200m. For women, 1.0sec is a better reserve time although there have been some women who raced with less in reserve to midway. In any case 1.0sec  of Speed Reserve allows almost any well-conditioned 400m sprinter  to finish strongly.

So Speed Reserve and the Race Differential both are significant players in the final outcome down the home straight. Of course it is true that you don’t need to wait until 200m to ruin a 400m. Plenty of problems observed in the final 100m segmental can be tracked back to errors initiated in the first 100m of the race.

Technical Efficiency is a crucial element in creating a very fast 400m sprint and surviving the pace in the home straight. Technique can be improved, streamlined. There have been plenty of discourses on the topic of improving running biomechanics (through therapy, drills etc) so I don’t propose to say much on the topic other than to state the bleeding obvious that Technical Efficiency is strongly related to Energy Efficiency. A motor vehicle with misaligned wheels or tires that have deflated will burn up fuel faster than a streamlined, highly tuned vehicle.

Race Tactics, which are related to – in fact, dependent upon – all the issues mentioned earlier, including Speed Reserve, Race Differential and Technical Efficiency.

I like to emphasize the concept of Triple Extension  (of hip, knee, ankle joints) to some degree beneath the torso in an upright running position throughout all the sprint races (indeed, including the 800m) but especially when entering and departing a bend.

A break or collapse of the (usually left side) hip, knee or ankle at any stage but particularly round a bend is like driving your motor vehicle with the handbrake applied.  Much energy and velocity is lost, nothing is gained from a collapse of the T/E model at any stage of the race.
From a tactical aspect, and in so much as the final 100m is concerned, what you do during the preceding third 100m segmental will largely affect performance in the home straight.

In an efficient and fast 400m race there are usually only two “moves” a competitor makes. The first is an aggressive attack from the blocks for up to 60m to establish cruising velocity and a mechanically efficient race rhythm. From there most great 400m runners go into what Australia’s two-time Olympic fourth-placed Darren Clark (Area Record 44.38sec) described as “auto pilot” until the next and final “attack”.

That would usually take place somewhere during the third 100m and most often between the waterjump and the top of the home straight. Clark described his own move there as “turning up the voltage slowly rather than flicking a switch to turn the lights on.” He started to dial up his final surge at the waterjump but it was hardly noticeable until he came hurtling off the last 20m of the bend into the final straight. Working with Clark for his 44.38 set at the 1988 Seoul Olympics which remains the Aussie record 25 years on, and for his 1990 Commonwealth Games gold in 44.60 (4th 400m in 28 hrs), we emphasized the vertical vector of his running throughout his annual training programme.

He aimed to maintain stride length despite extreme fatigue by accomplishing sufficient “air time” to execute clean mechanics, maintaining T/E and creating an effective horizontal displacement through a flight curve, or arc, rather than by any contortion of the lower back or hips in order to maintain projection forward. The pelvis must remain in a neutral position throughout the race. A posterior tilt represents a breakdown in technique.

The arms are key players in all sprints, not “merely” to establish the race rhythm and help maintain it but to help create the forces to enable the vertical component of the final surge, “the lift” out of the bend – the last chance to gain a sling-shot effect. A good portion of whatever forces the arms generate ultimately ends up as an impulse against the track. The quality of that impulse – in other words, the quality of contact – is the crucial factor in sprinting.

In terms of endurance training to help 400m sprinters finish their races, one session I find particularly helpful is 4x60m (or 80m) off 30sec, all rolling starts, followed by another “rest” of 30sec before sprinting 200m. By depleting the “cheat factor” or “gun powder” (phosphates) initially, the subsequent 200m feels like the last half of an extremely tough, fast 400m race.

And if one path toward progress over 400m may ultimately involve “stacking” of phosphates (ATP-CP) then the sprints up to 80m off 30sec recoveries may help in that respect too.

But that’s just between you and me. I wouldn’t want the world to know one of my favourite 400m training sessions ;)