This article is guest blogged by Travis Hansen.  It is an excerpt from his book The Speed Encyclopedia.

Click here for all the articles written by Travis Hansen

I am sure just about anyone who is reading this has previously heard the term “power” used before.  This is the master regulator of sprinting speed. You generally hear it when an elite Olympic line of sprinters blast out of the blocks during the 100?meter dash, or when an NBA superstar posterizes his opponent, or when a major league baseball player skies up to nab a would?be home run above the fence line, or when an NFL athlete jumps 40” or more in the vertical jump test at the annual NFL Combine.  There is no question, it is truly one of the most impressive and highly coveted abilities, and there are many who are willing to do just about anything this day and age to get it.  Fortunately for us, power can be taught, learned, and improved by ANYONE with the right training approach.  But before we can train and gain power, I think it’s important to define it and have a basic understanding of what power really is.  By doing so, you will have a deeper core understanding of the term.  With this generally comes a stronger appreciation and willingness to want to perform it in potential times of doubt, resulting in greater adherence to the program and increased long?term success.  Power, by definition, is the end product of force x velocity. To simplify terms, I am going to use Strength x Speed because everyone is typically more familiar with these.  The more of each of these we possess, the greater our power levels.

Maximizing your strength and speed will always yield the highest output of power and athletic ability, period.  The bottom line is that if you want phenomenal power and explosiveness, then you have to be able to generate the highest amount of strength in the shortest period of time.  It does not matter if you are lifting heavy weights, lighter weights, or just your bodyweight, you have to produce strength and produce it as fast as you are capable.

Power is without a shadow of a doubt, the “master regulator” of sport performance.    If you want to jump out of the gym, cut on a dime, sprint faster than you ever thought possible, or increase the efficiency of your movements, to name a few, then you have to elevate your power output.  In 1999, McBride and his team of researchers conducted a study to measure power levels in certain types of athletes.14  The study involved a control group, and a series of powerlifters, sprinters, and Olympic lifters.  Researchers wanted to measure relative power ratios (bodyweight to power), and absolute power measures from all of the participants in each group.

Subjects performed a vertical jump, a smith machine squat, and a smith machine squat jump.  The results showed that the sprinters had the highest relative power (power to bodyweight ratio) and best vertical jump height, while the Olympic lifters generated the highest total power output, and powerlifters had the highest levels of absolute strength.  Surprisingly, though, sprinters and Olympic lifters did possess similar levels of strength in this particular study.  What was most convincing about this study was how much more total power the three groups achieved relative to the control group, indicating a really strong need for power.  It was dramatically higher in the three types of athletes, and indicates just how important this skill is to general athletic performance, and in the case of this book, speed!.  Here is one of the charts of the study that shows sprinters as having the highest level of power output in the vertical jump test.  I would also like to mention that the sprinters in this study weighed 170 lbs. on average, and squatted 450 lbs. on average.  That’s more than 2.5 times their own bodyweight! 24 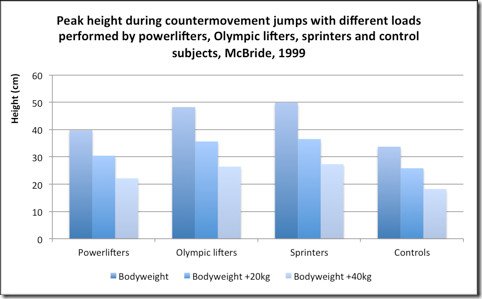 If you still naturally question, or have any doubt on whether or not elite sprinters, or those who are fast require greater levels of power (strength x speed) to enable faster running speeds, then there is a host of studies and data that will support this notion later on in this manual.

Real power training is one of the most rewarding training styles available to the public, once you dismiss the apprehension surrounding it and you become familiar with the exercises and how they should be performed.  This manual will show you how.  There are various methods we can select to improve our power development.  Some are better than others for developing power in specific areas of the body, some are safer than others, and some are less technical and complex than others.  But the one thing all methods share in common is that they ALWAYS demand you to summon as much force and energy as possible, as fast as you can, each and every time you attempt to move.  I cannot state the importance of this enough!

Next, we will look at a universally accepted and technical model that serves as a representation of power.  If you have ever studied human movement science before, then I’m sure you have probably seen the diagram I’m about to show you.  It’s called The Force?Velocity Curve.  Just think of it as the portrayal of the actual power definition where you have force (strength) on one end and velocity (speed) on the other.  The two together form power.  By applying this useful model properly through sound training over the long term, we can effectively maximize our power output and thus sprinting and speed skill.  How do we do this?  Basically, we need to integrate the essential and supremely underrated triad of powerlifting, Olympic  lifting, and sprinting to maximize both our power output and running speed.  Of course, there are other techniques and training types performed in this program, but these three are the primary ones that will always get you faster on the field, track, or court.  Each one of these disciplines has a lot to bring to the table, and we will never be as fast as we can be if we neglect or underachieve on any one of these skills. Never. 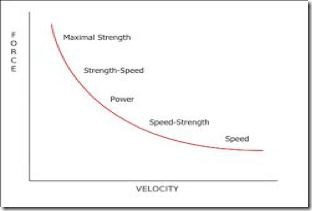 (Chart courtesy of articles.elitefts.com)
Training all along this entire curve is key to running faster!

Now we have some solid scientific evidence and a specific accompanying model to show just how important power is to developing speed. It’s now a good time to reveal the practical and permanent training model we will need to utilize to implement everything mentioned previously. To reflect all of this, I went ahead and created The Power Development Model for my athletes or those deciding to try our system who wanted to get faster. The beauty of this model is its consistency, simplicity, and reliability of it. It has a strong and unshakable structure that emphasizes all that we need to drive up our total body power and then some!

Travis Hansen was the Head Strength and Conditioning Coach for the Reno Bighorns of the NBADL for their 2010 season, and he is currently the Director of The Reno Speed School inside the South Reno Athletic Club.

He is the author of The Speed Encyclopedia.