This tutorial is guest blogged by Mike Goss, CSCS, and Level II USATF, jumps, throws, and combined events.  Mike is also in the Coaches Advisory for USATF-GA.

He previously wrote Motivating and Evaluating Jumpers  and  Progressive Training for Triple Jump.

Click here for all articles written by Mike Goss. 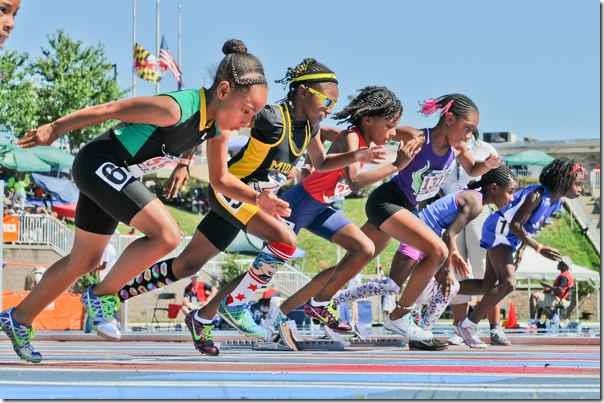 Nature, Nurture, and Window of Opportunity

The design and implementation of tests for athletic ability have simple and complex implications. Chronological and biological age are factors. Sports participation and physical activity are components affecting the development of motor abilities. Track and Field places athletes “center stage.” Individual skills are paramount; “Faster, Higher, Stronger” is the central theme. Although a simple idea, discovery and development of talent is important as with other team and individual sports.

RAE refers to the month one is born. Athletes with early birth dates tend to have an advantage. This factor typically leads to a larger, stronger, and faster athlete as compared to those born later in the year. There are exceptions, but the RAE is a proven developmental factor in progressing young athletes.1

Studies in youth soccer and age group (Canadian) ice hockey have been documented to demonstrate the advantages of older athletes. Among these athletes (though in the same age group classification) there is often the following:

The above factors create a snow ball effect; the older athletes, who often tend to be more mature, have a natural advantage leading toward advanced training and competition. A study of the birth dates within the NHL is similar to the youth hockey and soccer study. Much fewer athletes born from April – December, compared to those born early in the year, progress to high level youth teams. Soccer has a similar situation in its most talented organizations. The early birth date theory has been challenged. Yet, the training of older athletes has advantages not afforded many of their younger counterparts.2

COMPARING THE US WITH EASTERN EUROPE

The Cold War was not only a political cauldron of unrest and conflicting ideology.

This might be an amusing topic to many, but the sociology of sport is closely tied to cultural and social systems, East and West. Following are points of consideration comparing the USA, Eastern Europe, and Australian sports programs.

Repercussions with specialization at early stages of training/age:

According to Fransen participants in several sports perform better than those who specialize, this includes skill testing. ex. standing long jump 3

The USATF coaches education program centers much of it’s curriculum on the 5 basic biomotor abilities:

Many of the USA’s fitness tests, Presidential Youth Fitness Test and Fitness Gram, are available for evaluation. http://exrx.net

*Ex.Rx is a website with a wide variety of tests and scores

East European countries incorporate a multifaceted system. Participation in a variety of sports and fitness activities is encouraged; only 5-10% of the training is specific sports development.

Below are the (East European) findings regarding sports specialization:

Below is a basic test for Athletics (track and field) from Australia:

The above test is available to 12 – 29 year olds (Australia). An interactive website provides a scoring grid. If the scores are above average, the athlete is encouraged to visit a Talent Assessment Center (TAC). Individuals are then targeted to specific programs and coaches. 6

The above test can be viewed at http://www.ais.org.au/talent

End of Part 1.  Part 2 will be published tomorrow.