The landing in the long jump and the last phase of the triple jump is marked by the extension of the legs in front of the athlete before contact. Many coaches struggle with teaching this aspect of the horizontal jumps. Hopefully with this article I may shed some light on the biomechanical challenges, and possible solutions.

When a jumper lands with the feet under them in the pit –without the desired leg shoot in front — it is usually because it’s the safest way for the jumper to land given the trajectory they traveled in the air.

The long jump take-off angle should be around 21-23 degrees (Tellez). At those types of angles the jumper’s center of gravity is set on a parabolic course of flight, whereby they are traveling horizontal enough at landing that the legs should be extended in front of them — to match up with a fitting direction of entry into the pit. (See Figure 1) 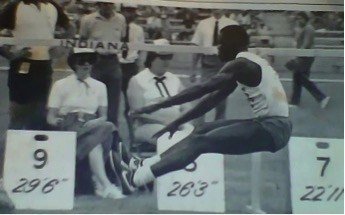 Whereas if the coach cues too steep a take-off in looking for too much height, the athlete will pass through an extremely high apex in the air, and come down at a steeper angle than optimal. In this case, jumpers MUST put their feet below them to land safely because they are moving so steeply downward. It’s a matter of instinct, and for survival purposes that athlete is CORRECT to react that way. So to remedy this, the take-off angle must be lower to avoid a steep descent.

Consider if one were hanging from a chin-up bar with the feet dangling. If they let go of their grip and started to fall, they would keep both legs aligned straight down to land on their feet because of the steepness of the fall.

See also  This Is Your Life - Jesse Owens

So the steeper the rise and fall, the more likely the athlete will innately react by pointing the legs downward in the direction of descent to land on their feet. Thus coaching a lower take-off angle, resulting in more horizontal flight, might be needed for jumpers to extend the legs outward in front of them.

Once the coach determines the take-off angle is satisfactory, no matter what the aerial style used, the landing extension is initiated just after the peak height of flight. Too early an extension of both legs after take-off will cause over-rotation – tipping over in flight (Schmolinksy).

For a good potential landing, the body should be carried upright through the last steps of the approach and generally upright through the air. Additionally, the hang style is often performed in error by over-arching the back. This disturbs flight posture and makes the landing harder – the legs are further back and take too long to rotate in front before landing (Schmolinsky).

During the flight, if anything on the long axis of the jumper is not vertical it would be the curling of heels behind the body, giving the illusion of an arch. (See figure 2) 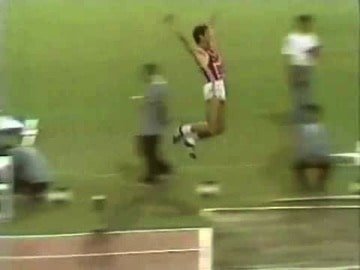 (Figure 2. Emmiyan hangs during mid-flight about to set up the extension, with the truck upright and heels curled back, giving an illusion of body arch. The lower back is hardly arched.)

To set up a landing extension, it is most challenging for a horizontal jumper to raise fully extended legs as a unit out in front of them. The long leverage makes it difficult. But much like a hurdler leads with a bent knee into the hurdle first (shorter leverage), then extends the foreleg second, the horizontal jumper can do the same.

In the hang style, both legs are brought forward simultaneously to prepare for a landing. With the hitch kick or sail styles, the jumper extends one leg for landing, then the other. In either case leading with the knee(s) flexed up first, then kicking out the lower legs second, seems to be more efficient (See Figures 3&4)

Also, with most of the world’s best athletes the arms are rotated over the top of their head either simultaneously (hang-style), or one at a time (hitch kick), while the legs extend. 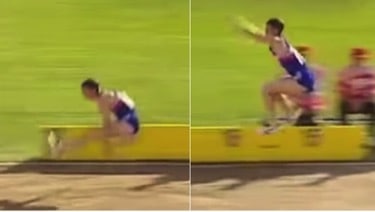 (Figure 4. Phillips extends one leg then the other, leading with a flexed knee first for each leg. Forward trunk leans just before contact.)

Much of the time telling an athlete these flight fundamentals, or even showing them video won’t work for them. They still can’t execute.
One cue that may work for landing extensions, which admittedly isn’t very fancy or ultra-scientific, is to tell the jumper they must see their feet – “See your feet in front of you.”

If they’re told to bring their feet up into their frame of view, so they can look at them in front before landing, athletes might sometimes figure it out. It’s possible that certain athletes just need a landmark, and they can then get a feel for the necessary biomechanical movements needed to get there. This cue has worked many times for us at Rider.

There are typically two ways of handling the impact of landing,

At Rider, we prefer to yield, or to allow the hip and knee joints to bend just after the bottom of the feet reach their impact. The jumpers try to compress the over-all body to absorb the landing. They end up in a deep squat position with the bottom of the butt hitting the sand between the feet.

To prepare for this phase the shoulders should be shifted slightly forward of the hips, and arms outstretched along with the legs before impact (See Figure 1 again, above). 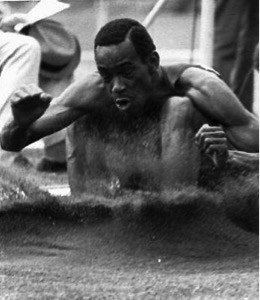 We feel that allowing the joints to give upon landing is safer, and guarantees both legs are squared off, and their muscles share the impact burden evenly. It also produces a smaller crater in the sand, as opposed spraying it in different directions — risking that the head or an arm lags back and drags through the sand, far behind the initial location of foot contact in the pit.

In either case, the worst mistake a coach would make is to allow a jumper to land without following it immediately by either sliding or yielding – as it’s an injury waiting to happen.