Nike’s lightest and strongest basketball shoe owes its existence to Nike’s revolutionary Flywire technology as it made its transition from track spikes to basketball. Flywire is the innovation driving Nike’s strongest and lightest footwear. Super-strong nylon filaments provide precise support akin to the suspension cables in a bridge, and allow a radical reduction in weight with material only where it’s needed for structure.

Rigorous testing was required to translate the technology into basketball. In running, the typical forces are straight ahead, but in basketball, footwear must accommodate a 200-pound basketball player landing on his feet with upwards of 2000 pounds of force. Then there’s lateral forces with side to side cutting and 45-degree lateral moves which all require exact stability in the upper. In Nike Sports Research Lab (NSRL) testing, basketball wear-testers cut with the ball in an early prototype as minimal as a ballet slipper, yet the shoe held up. It didn’t “tube-sock” as researchers call it: the shoe didn’t roll over athletes’ ankles. Instead, it supports them ensuring they don’t invert their ankles. 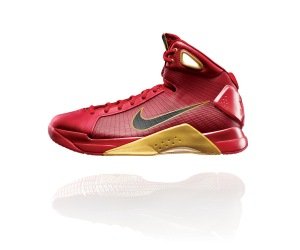 Before testing with athletes, the NSRL developed something they called “The Roman Sandal”. Simply board and straps, the researchers developed the prototype to see exactly where the shoe needed support to determine the Flywire placement. As NSRL researcher Matt Nurse explains, “We figured, ‘What’s the bare minimum the shoe can be and still work?’ Now the designers could literally wrap it in plastic wrap and we’d know it would work.”

But, the Nike Hyperdunk’s designer Eric Avar did far more than that. He created a shoe with the style of Nike’s classic basketball footwear from the original Air Flight Huarache in the early ’90s to the Huarache 2K4. The Nike Hyperdunk’s upper is encased in a web of Flywire filaments. As work on it evolved, so did the outsole. The design and research team saw that with a more flexible midsole and outsole, a Flywire upper has a more dynamic fit. The shoe now marries Flywire with Nike’s other new cutting-edge technology, Lunarlite foam, the super light springy cushioning in the forefoot, and Zoom Air in the heel. A small keyhole at the ankle ensures the upper stays with the leg in those hard-angle cuts, and the flex grooves between each toe allow players to articulate and flex each toe for added stability, flexibility and comfort. At just 13 ounces, the Nike Hyperdunk weighs three ounces less than the average basketball shoe.