BEAVERTON, Ore. – “ As LeBron James proved in a Gold Medal campaign this past summer in Beijing, he is a basketball player who can do it all and he requires a performance shoe that can keep up with his demanding game.

The Zoom LeBron VI shoe, the most versatile LeBron signature shoe from Nike and James, will be introduced at retail on Friday, October 31, in the U.S. and Asia Pacific. It will be available in Europe and Canada beginning January 2009. 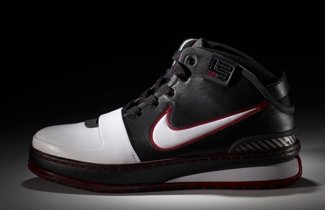 The Zoom LeBron VI performance basketball shoe represents the essence of LeBron James: team, toughness, passion and vision. James worked with Nike designer Ken Link to create a shoe that meets his performance needs and the needs of players with a powerful, dynamic style of play. The Zoom LeBron VI not only has a full-length Zoom Air unit in the mid-sole for the ultimate responsive ride, but also has a Zoom Air unit double-stacked in the heel. The cushioning system helps the forefoot for transition when jumping. Deep sipes in the shoe allow for natural motion, which means the shoe works with the athlete’s movement, rather than against it.

The shoe’s collar has been engineered with a wider opening so it’s easier to slip on and wear while maintaining a full-length fit feel. On the collar, graffiti art highlights LeBron’s mantras: passion, family, winning, fearless and vision.

Integrated marketing and communication support for the introduction of the Zoom LeBron VI varies by global region and includes print, digital, out-of-home and broadcast advertising in addition to public relations. 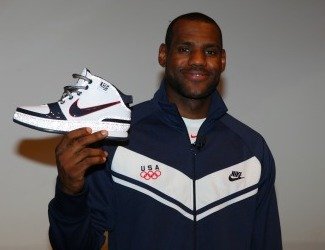 Print imagery capturing James leaping over players wearing the previous five iterations of his signature footwear and labeled “The Six”, will run in prominent sports and vertical basketball publications and as out-of-home in the U.S. region.

Nikebasketball.com has created content that provides an in-depth view of LeBron’s signature product.

The U.S. television spot, dubbed “Chalk”, draws its inspiration from LeBron’s pre-game ritual of tossing talcum powder into the air at the scorers’ table before each home and away game. The 15-second “Chalk” will air over the first few days of the NBA season during nationally televised games.

Asia Pacific captures the unstoppable nature of LeBron James in a series of broadcast spots dubbed “Bring Everything” (30-seconds) and “Try to Stop Me” (30-seconds). The spots are scheduled to begin airing November 1.