NIKE, Inc. and reigning NBA Rookie of the Year Kevin Durant showcase the next generation of footwear with the launch of the KD1, Durant’s first signature shoe with the brand. By taking a personal journey through Durant’s life, Nike designers seamlessly integrate superior performance with personal design touches.

Durant’s relentless work ethic is well noted and fundamental to the KD1 design. From the age of nine he has been a “gym rat” through and through and the KD1 includes design details that reflect Durant’s determination. His strong work ethic has carried him from his amateur basketball playing days to life now in the league. Nike collaborated closely with Durant to create a signature shoe with performance and design at the forefront.

“Working with Nike on my first signature basketball shoe was a dream come true,” said Durant, consensus 2007 National College Player of the Year and Washington, D.C. native. “My goal was to introduce a shoe that performs well, looks great and showcases my roots.” 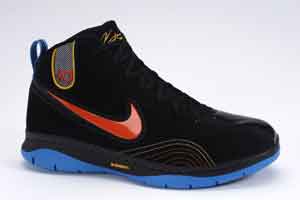 Nike designers met with Durant to get to know his personality and sources of inspiration. The KD1 has many storytelling elements including:

The KD1 shoe is a lightweight, well-cushioned and sleek men’s basketball shoe. Durant plays small forward and needs a lightweight shoe that can keep up with his quick sprints down the court. KD1 has a Nike Zoom unit and a lightweight injection phylon midsole for exceptional cushioning. It’s also equipped with plenty of flex grooves on the outsole that forwards need for multidirectional cuts.

The KD1 is now available in the United States at Nike.com, Hibbett Sporting Goods, Champs, Eastbay.com, Finish Line, The Sports Authority and Foot Locker. The suggested retail price is $88.