What are the limits to Masters track?

We know about attrition and the effects of aging on fast twitch fibers.  For more insight, see my earlier posts on Speed and the Masters Sprinter and The Attrition Rate of a 400 meter Sprinter.

Why is there a jump in performance in the “older” age groups?   A smaller sample pool?  It’s not uncommon to have 4 rounds in the M45-55 age groups.  Over 81 athletes requires 4 rounds at International meets.  Good luck getting 8 guys to show up for the M95 100 meter dash. 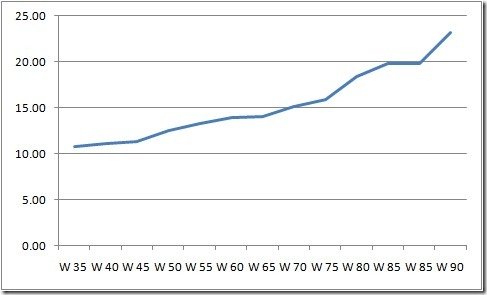 First, notice how the World Records are set at the beginning of the respective age groups?  That’s why you’ll see athletes “ducking” in the tail end of their age groups.  The most common excuse is financial hardship for long travel.

Why the sharp decline in performance at the older groups?

From the study, the general decline in sprint performances with age were evident around the 65-70 year old age groups and they concluded it was primarily related to reduction in stride length and increase in ground contact time.

Gee, thanks guys, we know it’s related, but what is the true cause?

Do you really believe it’s your neurons slowing down?

Lack of strength in your infrastructure (bones and muscles)?  If so, perhaps it’s the loss of muscle mass in men and osteoporosis in women?

If that’s the case, then there’s a lot to be said about the long term effects of an acidic diet, and why you should strive for a more alkaline diet.  That’s theory #1.  More on that later.

Below is the original summary of the research paper:

PURPOSE:  This study was undertaken to investigate age-related differences in the velocity and selected stride parameters in male and female master sprinters and to determine which stride characteristics were related to the overall decline in the performance of the 100 m with age.

RESULTS: There was a general decline in sprint performances with age, the decrease becoming more evident around 65-70 yr of age. The velocity during the different phases of the run declined on average from 5 to 6% per decade in males and from 5 to 7% per decade in females. Similarly, SL showed clear reductions with increasing age, whereas SR remained unchanged until the oldest age groups in both genders. Furthermore, the CT, which correlated with velocity, was significantly longer, and FT, which correlated with both velocity and SL, was shorter in older age groups.

CONCLUSION: Our findings indicated that age-associated differences in velocity in elite master sprinters were similar in each phase of the 100-m run. The deterioration of the overall performance with age was primarily related to reduction in SL and increase in CT.